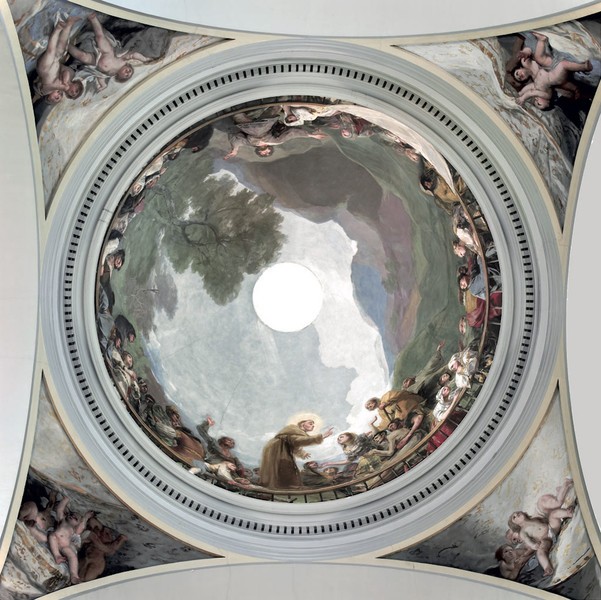 The Chapel of San Antonio de la Florida is set in gardens and wooded land that served as a recreational area for residents of Madrid in what was once the outskirts of the city. There had been a chapel there in the past, built by Churriguera and later replaced by Sabatini following the destruction of the original building. The plot was purchased by Charles IV of Spain, who wished to establish a palace and gardens there, and the chapel was destroyed once more to be rebuilt by Felipe Fontana between 1792 and 1798. Due to the fact that it belonged to the estate of the Spanish royal family and by virtue of a papal brief issued by Pope Pius VI on 30 July 1798, the chapel was removed from ordinary church jurisdiction to become directly dependent on the palace.

Goya received the royal commission to decorate the chapel in 1798, and it is known that in June of that year he had already begun work on the project. He had been awarded the commission thanks to his friendship with the enlightened figures of Francisco de Saavedra and Gaspar Melchor de Jovellanos, at the time serving as Secretary of State and Minister of Grace and Justice respectively.

In order to carry out the work, Goya employed the painter and craftsman Asensio Juliá, who would have served exclusively as an assistant, carrying out the duties of preparing materials, securing the designs and so on.

The paintings were finished in around November or December 1798, since on 20 December of that year Goya submitted a breakdown of the costs incurred for "painting materials and similar". The chapel was inaugurated on 11 July 1799.

Goya's remains (although not his head) were buried under the main altar of the chapel in a granite tomb with a marble tombstone. He was interred here together with his friend and the father of his daughter-in-law, Martín Miguel de Goicoechea in 1919, and since then San Antonio de la Florida has been considered a mausoleum for this genius.

The chapel has a Greek cross floor plan and apse at the head, with a central cupola that features the main scene of the set of paintings. It narrates one of the many miracles performed by Saint Anthony of Padua; in this case, when he raised a dead man so that he could declare that he had not been killed by the saint's father, Martín de Bullones, as evidence suggested, but by another who had tried to place the blame on him. In raising the dead man, the saint proved that Martín de Bullones was indeed innocent of the crime.

The saint is shown standing on a rock, set above the other figures in the painting in order to highlight his importance. He is represented as a humble friar, while his head is framed by a saintly halo. The dead body being brought back to life is shown as a ghostly figure, a character which would become a frequent feature of Goya's later work.

On the right and left of the saint there is a colourful crowd milling around behind the simple balustrade that lines the cupola, where the witnesses to the miracle lean as if over a theatre balcony. Tiepolo had used a similar device in his paintings for the Labia Palace in Venice and the Villa Cordellina in Montecchio.

Goya moves away from the traditional depictions of the time in his rendering of the individual figures, depicting ordinary young men and women, local people and passers-by. One interesting group is that of the three young women whispering to each other. One of the girls, who gazes devoutly at the saint, is dressed in a beautiful white veil with touches of ochre. There are also three men in ruffs followed by two female figures executed with great delicacy.

A great white cloth has been draped on the balustrade, increasing the realism of the painting. Next to the cloth is a woman watching a standing male figure who is emphasised in the composition and serves to counterbalance the figure of the saint.

Near the saint there is a series of characters in poses expressing their devotion, while a man in a yellow frock coat who seems to be the real murderer flees the scene.

The event takes place against a background of trees and mountains which echoes the surroundings of the chapel and breaks away from traditional cupola paintings depicting heavenly light, clouds, and flying angels.

The pictorial freedom with which the paintings have been executed is striking, and is partly due to the fact that the artist's work was not subject to the approval of church or academic strictures since the commission was for the royal family.

The pendentives, vaults and lunettes feature a series of angelic figures framed by drapes against a grey background. Many of these figures are clearly female angels dressed in period clothing and endowed with a certain degree of sensuality which was rare in this kind of work. In the apse, these female angels are linked to a central group of sculptures depicting angels in prayer and the triangle of the Trinity.

Since 1910 have been documented several restoration works:

Between 1990 and 2005 by the Ministry of Culture’s Conservation and Restoration Institute.