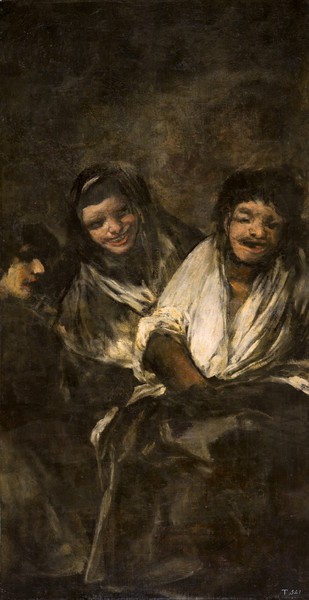 This work was located on the same wall as The Reading (La lectura) on the first floor of the house known as the Quinta del Sordo, on the wall opposite the door. Like its companion painting, it is also a vertical composition. The title given to the work by Brugada - Two Women (Dos mujeres) - and that chosen by Yriarte - Two Women Laughing (Dos mujeres riéndose) - are so imprecise that we cannot know how they were interpreted when they were viewed in their original location. The way the women laugh at the third figure in the painting, as well as the man's contorted facial expression and pose have led to the interpretation most commonly accepted by art historians and proposed by Angulo, who describes the man as being involved in the act of masturbation. In turn, the act has been linked to the Athenian myth of the Vulcan, whose semen, rejected by Minerva, fell on the Earth (Gaia) and engendered a monstrous being. Nevertheless, x-rays and old photographs have proved that the painting underwent repainting, altering the original position of the hands and lap of the man: originally, he may have been holding a piece of paper or a book. Based on this new vision of the work, Glendinning proposed the theory that the wall at the end of the room was dedicated to two different expressions of reading: one serious (The Reading) and one comic (Two Women and a Man).

This work was restored by Martínez Cubells, who lifted the paintwork from the wall to transfer it to canvas, and also repainted certain sections of the composition where the paint had been lost.