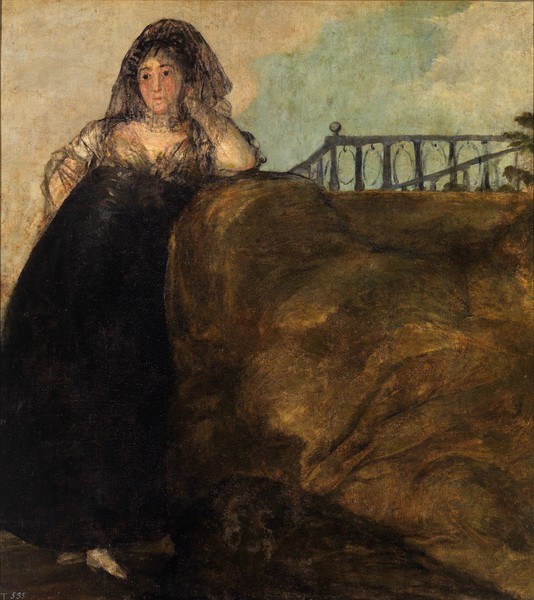 On 27 February 1819, Goya purchased a residence in the outskirts of Madrid from Pedro Marcelino Blanco. It was a country house known as the Quinta del Sordo ("House of the Deaf Man"). Goya gave instructions for the building to be restored and renovated.

Around 1820 Goya began preparations to decorate the two large rooms on the ground and first floor with paintings.

The painter bequeathed the house to his grandson Mariano in 1823 when the paintings had already been finished. Mariano gave the house to his father in 1830, inheriting it once more in 1854.

The building subsequently had various owners before it was eventually purchased by Emil d'Erlanger in 1873. When he saw the ruinous state of the house, he decided to have the paintings transferred to canvas, hiring Salvador Martínez Cubells (a restorer working for the Prado Museum at the time) to carry out this task.

In 1878 the paintings were sent to Paris so that they could be exhibited in the Palais du Trocadéro as part of the Exposition Universelle held in Paris.

They were donated by d'Erlanger to the Spanish state and returned to Spain by order of a Royal Decree on 20 December 1881. Ten of the paintings were sent to the Prado Museum, while another four were sent to the Spanish Presidency of the Council of Ministers. Following the authorization of the Presidency on 3 February 1898, the paintings in its possession were also moved to the museum.

The distribution of the paintings in the rooms where they were executed has been a controversial subject, since their exact locations are not known with certainty. The available sources for this information are the inventory that Antonio Brugada produced in 1828 on the death of Goya, and a written text by Charles Yriarte from 1867. According to these accounts, Leocadia (La Leocadia) and Two Old Men (Dos viejos) were located on the left-hand side of the door. It is possible that the painting Two Old Men Eating (Dos viejos comiendo) was situated above the door, although some experts believe that it was located in the upper storey of the house. On the wall opposite the door were the works Saturn Devouring One of His Children (Saturno devorando a un hijo) and Judith and Holofernes (Judith y Holofernes). The two longer walls in the room were decorated with two large compositions: Witches' Sabbath (El Aquelarre) and The Pilgrimage to San Isidro (La romería de San Isidro). The upper floor had identical dimensions to the lower floor, except that the two longer walls, rather than being decorated with just one panel each, featured two panels on each wall separated by a window. The door was located in the same place as on the lower floor. On the left of it was an empty space, although some historians believe that Two Old Men Eating was located there. As has been commented above, some experts claim that this painting was located above the door on the lower floor, while others - such as Gudiol and José Manuel Arnaiz - believe that the space was filled by the painting Heads in a Landscape (Cabezas en un paisaje) If this is the case, then there would be fifteen black paintings as opposed to the previously established fourteen. On the other side of the doorway was the painting The Half-Submerged Dog (Perro semihundido). On the longer wall on the left were The Fates (Las Parcas) and Duel with Cudgels (Duelo a garrotazos).

On the short wall opposite the door were the paintings The Reading (La lectura) and Two Women and a Man (Dos mujeres y un hombre). The other long wall was painted with Procession of the Holy Office (Paseo del Santo Oficio) and Asmodeus (Asmodea).

Some authors, such as Sánchez Cantón and Xavier Salas, believe that the distribution of the paintings corresponds to an idea or programme that connects all the paintings in the series, since each composition seems to be related to the next.

Others have tried to find a philosophical, symbolic or esoteric meaning in the series, although in Gassier and Wilson's opinion, they merely reflect the artist's "descent into hell".

Leocadia is the starting point for the rest of the Black Paintings. The subject is a female figure shrouded in a black veil, leaning on what might be a funeral mound, dressed in the clothing of a manola or fashionable young woman (also one of the painting's alternative titles in Spanish). The sitter can be identified as Leocadia Zorrilla or Leocadia Weiss, the wife of Isidoro Weiss and Goya's housekeeper during the last years of his life. She is the image of youth and life that contrasts with the rest of the paintings, which are imbued with a sense of horror and a nightmarish atmosphere that can be linked to the death of the artist himself, a theme that obsessed the artist during his final years. Aside from this painting in the entrance to the house, the rest seem to be some kind of visions after death. Some experts, including Arnaiz, interpret the figure as the personification of melancholy, since she seems to be meditating on life and death.

Goya did not use an entirely black ground for this painting: in this case he also employed other colours such as white and ochre. The colour black appears in the form of the figure's dress, which is simply rendered as a black patch of colour. Her feet peep out from under it in two white brushstrokes. The figure and the tomb she leans on contrast with the light sky in the background.

Recent x-rays have proved that the painting underwent many changes, and that the figure's features had once been different, she had been depicted without the veil, leaning on what seemed to be a doorframe.

The painting was restored in 1973 due to its poor state of conservation following its transfer to canvas by Salvador Martínez Cubells. It was restored again by Cristóbal González in 1979, and was consolidated and varnished in 1987 by María Teresa Dávila.