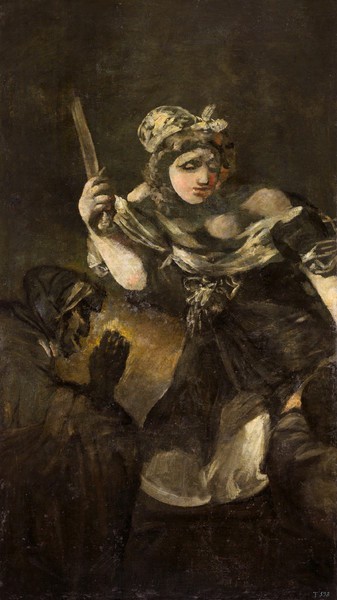 In accordance with the generally held belief that Saturn was located opposite Leocadia Judith was thought to be placed opposite Two Old Men on the same short wall as Saturn on the ground floor of the house known as the Quinta del Sordo. However, a new theory posed by Glendinning and based on the way the light falls on Saturn and Judith in some old photographs taken of the room suggests that their positions would be reversed, though they remain on the same wall.

The painting represents the biblical scene in which Judith cuts the head off the Assyrian general Holofernes. Goya moves away from traditional iconography, eliminating the biblical attributes usually included in depictions of this theme. The jewels and riches described in the story are not present here; rather, the painting focuses on the action. In fact, the Judith portrayed in this painting could have been a woman from Goya's own times. The artist presents the viewer with an unidentified location rather than the usual setting of Holofernes' tent. The figure of the general is barely visible, although his head can be vaguely made out in the right-hand corner of the composition. Goya focuses the viewer's attention on the figure of Judith in the moment just after she has killed her adversary, holding the murder weapon in her right hand. The light falls entirely on her figure, leaving the servant and accomplice who is with her in the darkness. This light gives volume to the figure, to her face, arm, bust, and the hand holding the knife.

Many interpretations have been made of this painting. Nordström writes that this painting seems to be intricately linked to Saturn Devouring One of His Children, since the retelling of biblical and mythological stories was a tradition that stretched back into the Renaissance. The painting could be related to the fear of the loss of power, such as that suffered by the Assyrian general. Nordström points to a sketch for the cupola of the Church of San Andrés Apostol in Madrid by an anonymous painter of the 17th century as a possible inspiration for the artist.

On the other hand, Muller associated this work with literary and dramatic works, reminding us that in Goya's times Judith was considered to be both a biblical heroine and femme fatale.

The figure emerges from a dark background thanks to a light focus that falls directly on her. The colour palette is reduced almost to a grisaille, with some light touches of vermillion on her face and elbow. It is executed in thick, strong, precise brushstrokes.

Apart from the restoration work carried out by Martínez Cubells in 1973, the painting was restored again in 1900 by Julián Jiménez Naga, and once more in 1934.

The canvas lost some substantial sections of the original ground when it was removed from the wall of the building. Numerous areas of paint were lost which were repainted.