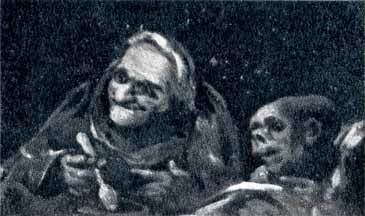 Goya must have produced a series of sketches or studies before he produced the final Black Paintings (Pinturas negras). Brugada's inventory from 1828 records "Seven caprichos (sketches from the country house)", and it possible that these were preparatory sketches for the paintings. Attempts have been made to identify some of these, including this sketch of two old men eating. Gudiol, Gassier and Wilson and Camón mention the same sketch, locating it in a private collection in Salamanca. Morales also refers to the work, although he considers it to be a small-scale copy and not the work of Goya. Arnaiz also refers to some copies in oil of the Black Paintings: these were apparently small-scale works by Eduardo Gimeno Canencia.

This sketch is almost identical to the original only on a smaller scale. It shows an old man eating soup and another skeletal figure holding some papers.