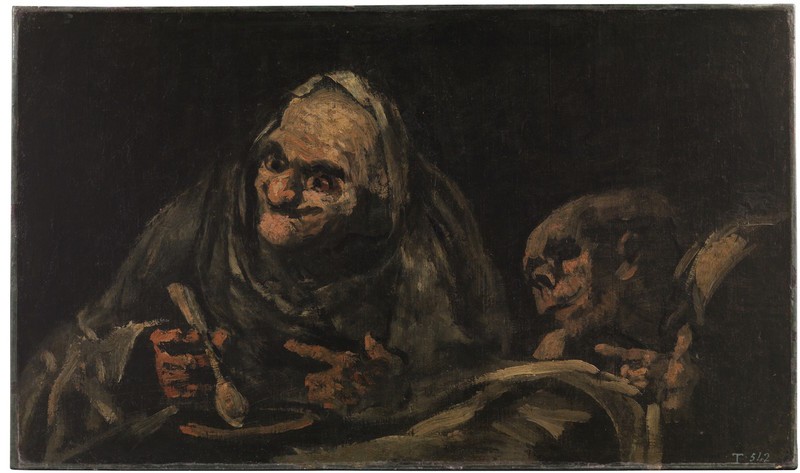 There is some controversy over the location of this painting in the house known as the Quinta del Sordo. While some authors - such as Sánchez Cantón or Muller - claim that it was located on the first floor, the majority of historians believe that it was situated on the lower floor, although there is no consensus as to its exact position in the room.

Its size and shape (it is smaller than the other paintings in the series) indicate that it was intended to be an overdoor painting for the entrance, but it is unknown if it was located outside or inside the room. According to Nordström, this work would have served as an introduction to the group, and since Yriarte points out that since there were only six paintings on the ground floor, this one must have been located outside of the room. On the other hand, Gassier and Wilson situate the painting inside the room based on Brugada's inventory.

The scene shows two old men eating soup. Only one of them is shown with a spoon in his hand in the act of eating. This character has a strange aspect, and it is unclear whether the figure is male or female. The other has a skeletal look, as if representing death itself. The old man or woman is gazing to one side and pointing in the same direction, although the reason for the gesture is not apparent to the viewer. Meanwhile, the other figure, which is holding some papers ¬- perhaps a list ¬- in their hands, whispers to the old man.

This painting has provoked various interpretations. Nordström suggests that the figure on the right represents Death, carrying the list of souls he will take with him to the afterlife. He also links the work to Saturn Devouring One of His Children, since Saturn is associated with old age and death. A wide range of opinions exist on this painting, from its associations with the Spanish picaresque to its links to the sin of gluttony.

The identification of the gender of the figures has also been a problem, since Brugada and Yriarte both believe them to be female. This confusion may also have been caused by the restoration work carried out by Martínez Cubells, since the most recent x-rays carried out seem to show that the restorer made some changes to the expression of the character on the left and painted in the hood he is wearing, although Muller claims that in the copy Eduardo Gimeno made of the work in 1869 the hood already existed.

It is a very simple, stark composition: almost a rough sketch. The painting was created with a few brushstrokes on a black ground, leaving the eyes, mouth and dark areas unpainted. It is a highly textured painting, and this intensifies its expressionist style.

Apart from the restoration work carried out by Martínez Cubells in 1973, the painting has been restored three times by the Prado Museum. In 1919 the paint was sealed. The painting was restored twice more: in 1968 by Cristóbal González and in 1987 by Rocío Dávila.