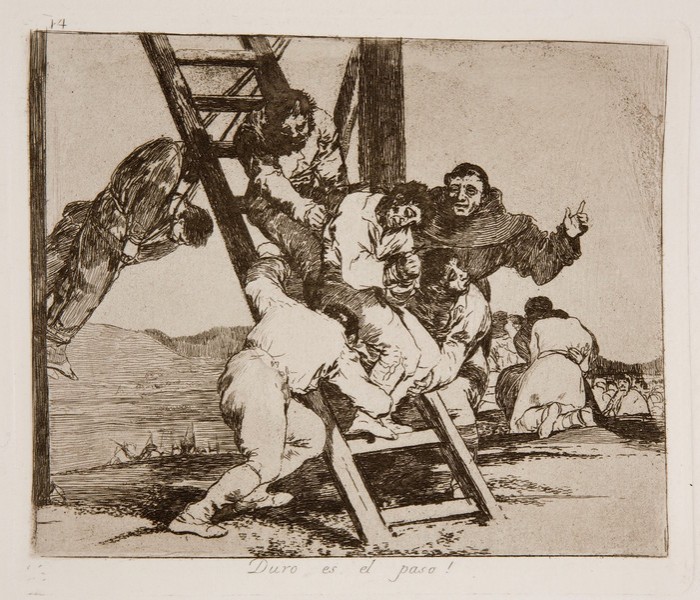 There exist two state proofs for this etching. The first of these shows some drypoint work on the right leg of the hanged man closest to the viewer. The second proof has some burnished lavis extending up to the edge of the plate.

There is a preparatory drawing in the Prado Museum in Madrid.

Three executioners are leading a man, his hands tied, to the gallows, where they are helping him to shuffle backwards up the ladder. The condemned man is looking down at the ground, his head slumped forward, as if pleading for mercy. At his side, a monk is attempting to comfort him. As he speaks, he raises his hand, the index finger pointing towards the sky, suggesting that he is perhaps explaining what awaits the man after death. The prisoner is not paying the monk much attention but one of the executioners is turning his head to look at the speaker.

Behind this group are two recently hanged men, their lifeless bodies swinging to and fro. On the right-hand side, a little further back, several men are getting another prisoner ready for the gallows. Goya has in this way set before us the complete sequence of a hanging, from the preparation of the prisoner through to the moment when the execution has taken place.

Eleanor Sayre, Mélida, Brunet and the Count of La Viñaza all agree that this scene depicts a real-life event, the executions that were carried out in Valencia in 1808, when the Spanish murdered 300 French residents accused of collaborating with the enemy. However, Dérozier believes that this etching may in fact show the execution of Spaniards accused of collaborating with the French.

Goya may have drawn inspiration from the print entitled The Hanging (La Pendaison) by Jacques Callot, number 11 in his series Les Misères et les Malheurs de la guerre, published in 1633. In that print we see a tree in the centre of the scene and, dangling from its wide leafy branches, a large number of hanged men. Crowds of attentive onlookers bear witness to the scene. In his print, however, Goya has opted for a scene on a more intimate scale, and the execution he depicts does not appear to be a public one.

This etching can be related to many others in the series, such as no. 31, That's tough!, no. 32, Why?, no. 33, What more can one do?, no. 34, On account of a knife, no. 35, One can't tell why, no. 36, Not in this case either, no. 37, This is worse and no. 39, Great deeds! With dead bodies!, all of which deal with capital punishment. Mention should also be made of The Hanged Monk and the story of the murder of the husband of María Vicenta Mendieta, as told within the series of paintings belonging to the Marquis of La Romana, which concludes with the execution of the murderess.

In around 1806 Andrés Rossi (1771-?) made a print depicting the execution of Pedro Piñero "el maragato" (National Library, Madrid). That work displays some interesting similarities with this one by Goya. In the image by Rossi we see the prisoner sitting on a ladder while the noose is tied around his neck, just as in print no. 14 of Goya's Disasters of War. Goya must have known of this execution since he himself produced a series of paintings telling the story of "El maragato".

Throughout his artistic career, and in particular in this series of prints, Goya showed his repugnance for capital punishment. He was probably familiar with Cesare Beccaria's (Milan, 1738-Milan, 1794) text on the subject, On Crimes and Punishments (Dei delitti e delle pene) (1764). In this treatise, the Italian author called for the abolition of the death penalty and proposed measures to humanize the punishments employed in prisons. He believed in the creation of policies focused on preventing crime rather than on dishing out - sometimes inhumane - punishment.

The etching plate is conserved in the National Chalcography Museum (cat. 265).