The Burial of the Sardine (El entierro de la sardina) 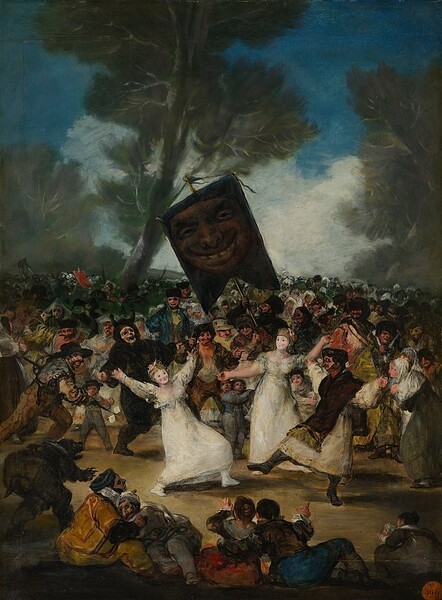 This painting is sometimes included in the series of Paintings of Festivals and Traditions (The Madhouse, The Bullfight, A Procession of Flagellants, and The Inquisition Tribunal). Although it is of a larger format, it is painted on mahogany, as are the other works in the series, and they have the same history. The five works all portray scenes of madness, but this one is not mentioned in the 1812 inventory together with the "Four small paintings of festivals and traditions". Evidently related, if not actually belonging to the same series, this work dates from the same post-war years, judging by the materials costs, technique, and its similarities to the Follies.

As in the case of the series Paintings of Festivals and Traditions, we do not know when it was acquired by the banker Manuel García de la Prada, although it is known that he left them to the San Fernando Royal Academy, as recorded in his will of 1834. All the paintings were entrusted to that institution in December 1839.

This work, one of the most highly acclaimed works of Goya's career for its attractive colouring and enigmatic nature, was painted on tropical mahogany, in this case reusing the door of a piece of furniture.

Although the best-known title of this canvas is The Burial of the Sardine, it does not exactly seem to represent that scene, since it was the custom to wear black for that festival - priests and widows who wept for the death of the sardine, signalling the end of the carnival. This pagan celebration had met with attempts to suppress it because it was seen as anti-Christian, was linked to the world of insanity, and was celebrated with the wearing of masks, which were also subject to various bans.

In the centre of the composition, two beautiful women in white dresses and pretty masks are dancing happily. The back part of their heads is covered with a second mask, and Goya had used this device on other occasions to represent women's ulterior motives, as in Caprice no. 2, They Say Yes and Give their Hand to the First Comer. They are accompanied by two men: one is dressed in what appears to be ecclesiastical robes, while the other is clothed in a black all-in-one suit with a skull mask and horns. On the left we can see two disturbing figures who threaten one of the dancers. A man dressed as a bullfighter with a lance in his hand seems to be on the point of attacking her in a moment of insanity. Cesare Ripa in his book Iconologia says that madness is represented by the man who carries a child's windmill. Perhaps Goya, referencing this text, created his own, Spanish version of this image, substituting the windmill with the lance, which the man seems to have snatched from the little bullfighter behind him. The second malevolent figure is covered with the skin of a black animal: his hands are claws and he wears a ferocious mask resembling a bear. Ripa linked this animal to rage. The pose of its body is that which any animal might adopt just before it pounces. The dancer has her back to these men, her face conveying the happiness of ignorance, while her companion has just noticed the danger. Some of the revellers also seem to warn of the dark drama which is brewing, and amongst the masked laughter we can identify gestures of fear or worry, for example in the pair of seated figures in the foreground, who raise their arms, agitated, or the woman swathed in white on the right, who clasps her hands to her chest.

Presiding over the festival, raised above the crowd on a standard, we have the mocking, ironic face of the god Momus, traditionally linked to carnival. His expression tells us that he enjoys the spectacle of an irrational society which has not known how to distinguish between fun and madness, leading it into tragedy.

A sketch for this painting traditionally considered to be a first idea for this composition, The Burial of the Sardine, is housed in the Prado Museum. However, its attribution to Goya is questioned by some academics, who think that it could have been produced by Leonardo Alenza.