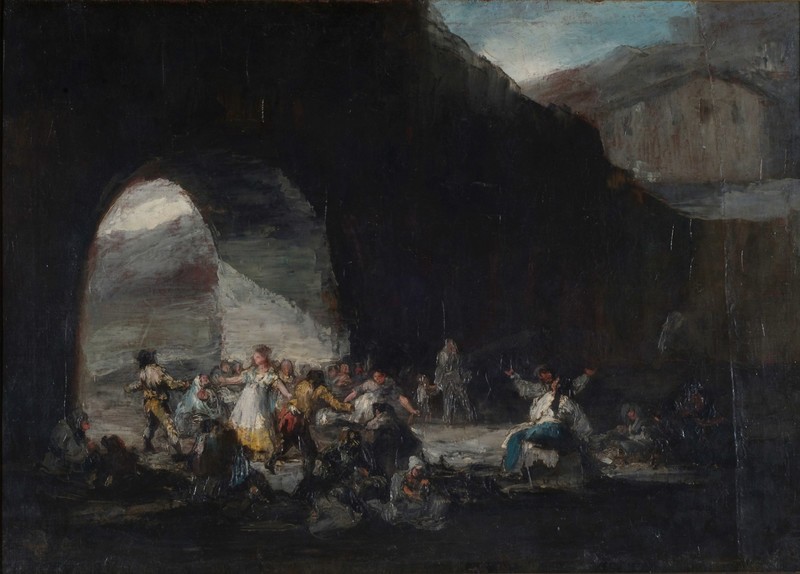 This work came from the collections of Javier Goya and Eustaquio López. It was sold in 1866 and became part of the collection of Doctor Lars.

It was later bought by Parmenio Piñero, who bequeathed it to the Buenos Aires museum on 14 August 1907.

The inscription X.28 that appears in this painting ties it to three others by Goya, Bandit Scene, Festivities underneath a Bridge and The Hurricane which are all mentioned in the inventory made in 1812, following the death of Goya's wife.

Beneath the arch of a bridge, a festive scene is taking place, with a group of people who have gathered to dance, talk and play music.

The compositional arrangement employed here by Goya coincides in a number of ways with that used in Children Playing at Bullfighting. In both works, the artist has painted a rounded arch on the left-hand side and the light enters the scene through this archway, illuminating some figures whilst leaving others in shadow. This method of arranging the composition can also be seen in Interior of a Prison.

In the present canvas, the light leads our eye to the female figure who is dancing slightly off-centre, on the left-hand side. She is dressed in white, with her arms outstretched, and is facing a man, her dancing partner. The light also highlights a seated figure, also dressed in white, to the right of the scene, who appears to be watching the two dancing figures. This part of the painting bears some similarities to Goya's Masked Dance. In actual fact, this other work appears to be based on a detail of Festivities underneath a Bridge: in it, the artist has concentrated on the female figure dressed in white who is dancing with her arms raised in front of a man, and has set the scene underneath another rounded arch.