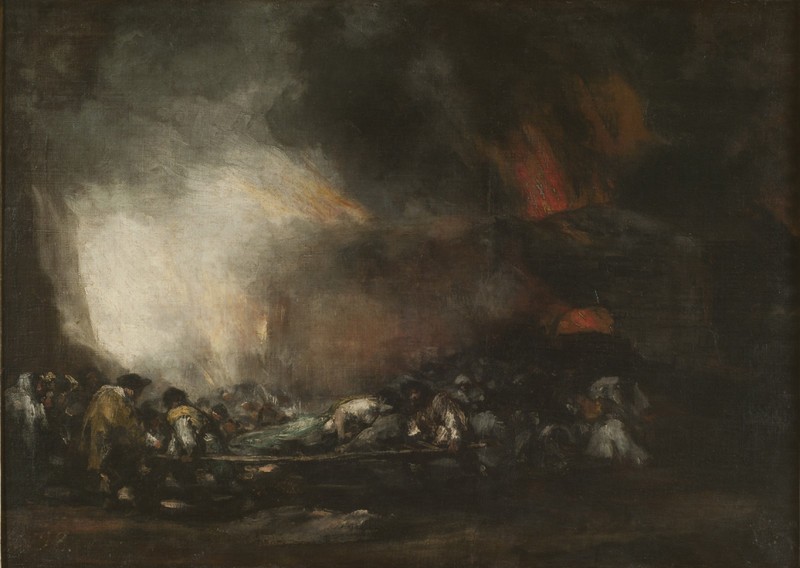 This work came from the 1958 bequest made by Doctor Carlos Alberto, Arturo and Eduardo Acevedo, in memory of their brother Horacio.

Thanks to the inscription X.28 that appears on this canvas, it has been possible to identify this work and to attribute it to the artist, together with three others: Bandit Scene, Festivities underneath a Bridge and The Hurricane. These four paintings correspond to those which appear in the inventory drawn up in 1812, following the death of Josefa Bayeu, and which were labelled with the number 28: "Four paintings of other subjects, with the no. 28, [valued] at sixty reales".

In the foreground, a group of people are fleeing in terror from a flaming building. A woman who has fainted or perhaps suffocated is being carried on a stretcher by a group of men.

In thematic and formal terms, this work very closely resembles The Fire, also known as Fire at Night, which Goya painted between 1793 and 1794. In both paintings we see people running away, crashing into one another in their confusion. In the centre of both compositions, the artist has created a brightly painted area representing the fire itself and occupying much of the canvas. Both works also feature an unconscious person who is being transported by others and which we can relate to the body sprawled out over the rocks in A Shipwreck. However, in Fire in a Hospital, Goya shows an increasing tendency to abstraction; the brushstrokes are looser and the setting in which the fire takes place is even less defined here than in the painting that the Aragonese artist made during his stay in Cádiz. The human figures appear to be of lesser importance and are scattered over the surface of the canvas. This device could have been an allusion to the lack of cohesion or solidarity between the victims of the unhappy event.

The painting in the Museum of Fine Arts in Buenos Aires must be considered in the light of Goya's interest in themes of disasters. It is likely that part of this interest came as a result of the artist having come into contact with the treatise by Edmund Burke (Dublin, 1729-Beaconsfield, 1797) on the sublime, published in 1757 (A Philosophical Enquiry into the Origin of Our Ideas of the Sublime and Beautiful). Burke stated that, the closer a representation of a disaster is to reality, the more perfect its power. It is that very realism, which the painter does not seek to avoid, which contains the work's ability to arouse in the viewer a mixture of terror and morbid curiosity.

It is possible that Goya had heard about the fire which destroyed the theatre at the Hospital of Nuestra Señora de Gracia in Zaragoza in 1778. This place, which staged all sorts of different shows, was founded in the 16th century. The takings from the performances put on at the theatre were used to pay for the upkeep of the hospital.