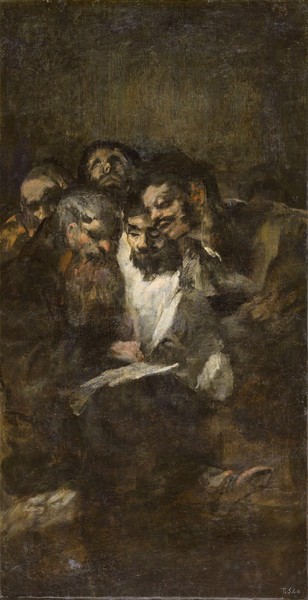 This is a vertical composition originally located on the first floor of the house known as the Quinta del Sordo, on the wall facing the entrance to the room. It is an everyday scene in which six male figures appear in the darkness around a central figure whose shirt offers a triangle of light. The viewer's gaze is drawn from this point of light to the paper the man holds in his hand and the three figures in the foreground. The rest of the men gather around the central character in order to hear him better, creating the effect of a crowd.

The figures are rendered in broad brushstrokes that give great expressiveness to the faces, which is all we can see of most of the figures. Some of the other characters' clothes are also visible, and these are also painted in broad strokes.

This is an everyday scene placed in a setting that is hardly appropriate to reading, given that the room seems badly lit with no visible window or door. The action takes precedence, with little importance given to the setting where the scene takes place.

At the time when the Black Paintings were produced the publication of periodicals was increasing, both political journals and the satirical publications that emerged with the Liberal Triennium, and this is possibly the reason behind Goya's choice of theme. It is difficult to interpret the painting's meaning, and it is usually linked to Two Women and a Man (Dos mujeres y un hombre), which was situated on the same wall. Glendinning suggests that these paintings represent two aspects of the culture of the time, the serious side in The Reading, and the comic side in Two Women and a Man. In the opinion of González de Zárate the painting's meaning is related to the political oppression of the time, and the way culture must have gone underground. Muller identifies the man reading as a monk, his audience as ordinary people: he offers various possible interpretations of the scene, including the consequences of illiteracy.

The positioning of the figures in the composition creates a dialogue between them. Likewise, a dialogue is also established with the viewer, who takes on the role of voyeur or curious onlooker.

There are differences between the painting that decorated Goya’s house and this version due to the restoration carried out by Martínez Cubells, who must have carried out various repaintings after the work was removed from the wall, losing substantial layers of paint in the process. According to Glendinning, among the changes made the restorer would have added elements of the faces in the background which were not well defined in the original or had partly disappeared. There had been a window in the background which was overpainted by Martínez Cubells when he reworked the figure that is looking upwards.