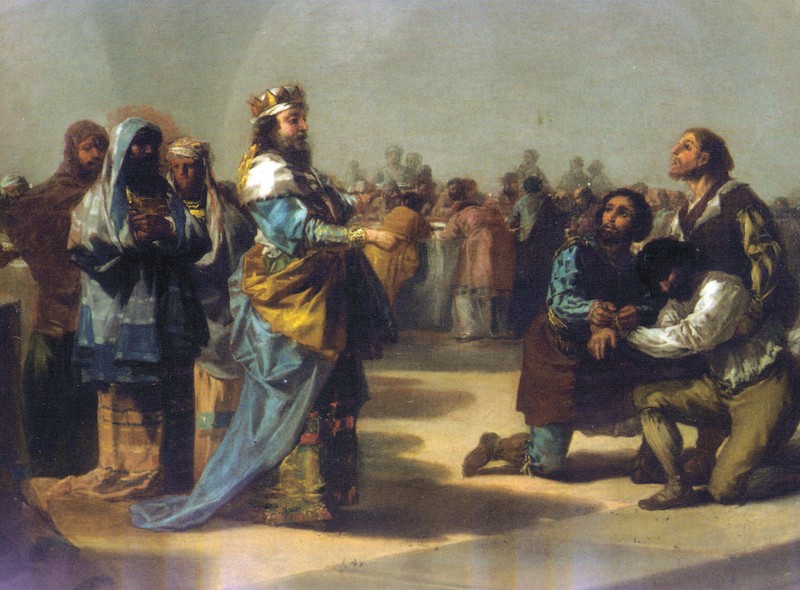 Goya visited Andalusia for the first time in 1793 when he was recovering from an illness, but it is unlikely that he was given the commission of producing paintings for the Oratory of the Santa Cueva (Holy Cave) in Cádiz at that point. A more probable date for these works is approximately 1796 when the artist visited the region once more. The purpose of his stay in 1796 was to visit his friend Ceán Bermúdez in Seville, having passed the summer with the Duchess of Alba in Sanlúcar. But between December 1796 and January 1797 he fell ill again whilst in Cádiz. It is also possible that he sent the paintings from Madrid, since it is known that he was already in that city in May or June of 1797.

The Oratory was built on the site of the original Santa Cueva, an underground chapel where the Cofradía de la Madre Antigua (the Brotherhood of the Ancient Mother) held its meetings. It was constructed between 1793 and 1796 under the patronage of Father Saénz de Santamaria, and designed by the architect Torcuato Benjumea. The construction work lasted for three years, and the Oratory was consecrated by Bishop Antonio Martínez de la Plaza on 31 March 1796.

Inside the building are five lunettes decorated with a series of canvases with the clear iconographic programme of the mystery of the Eucharist: the building's founder wished to dedicate the Oratory to the Holy Sacrament.

Three of these five canvases are the work of Goya: The Parable of the Guests at the Wedding (La parábola de los convidados a la boda), Multiplication of the loaves and the fishes (La multiplicación de los panes y los peces) and The Last Supper (La Santa Cena). The other two canvases are The Wedding at Cana (Las bodas de Caná) by Zacarías González Velázquez and The Gathering of the Manna (La recolección de maná) by José Camarón.

There is very little documentation supporting the history of these works until 1813 when the Marquis of Maule refers to the paintings by Goya in his book.

The Oratory has an oval floor plan, and its interior is organized around seven adjoining arches on pilasters. Five of these are decorated with a series of canvases, three of which are the work of Goya. In these paintings colour is used to create contrasts and define the different groups of figures in the compositions. This technique serves as a unifying element which Goya employs to give his works a narrative thread, as if he had been an eye witness to the events depicted.

The brushstrokes are broken and fragmented, juxtaposed, creating patches of colour on the canvas. The colours give form to the figures and objects in the paintings. The artist worked quickly and without hesitation, making few corrections.

Before proceeding to paint the definitive works, he produced some sketches, two of which have survived: a sketch for Multiplication of the Loaves and Fishes (La multiplicación de los panes y los peces) and one for The Last Supper (La Santa Cena).

Goya's canvas The Parable of the Guests at the Wedding is located on the Epistle side of the Oratory. It is based on events narrated in the Gospel of Saint Matthew (22:1-14), in which a guest is expelled from the wedding feast of a king's son for wearing the wrong clothing, an allegorical reference to the good character required in order to enter the Kingdom of Heaven.

In the foreground is the king and next to him the guest, held up by two servants, while the banquet is relegated to the background.

The scene is grandiose and theatrical, the two groups confronting one another in an atmosphere of high drama. The events take place in a large hall with a raised floor; to its right are a step and a section of wall. In the background some vaulting is visible with two curves that branch off in opposite directions. There is a dividing line between the two groups which creates a space in the middle of the canvas, allowing us to view the whole of the room back as far as the banquet. Thus, on the left-hand side of this divide are the king and his companions, depicted with a rich colour palette, while the group containing the punished man is on the right-hand side, rendered in browns and greys.

The work is executed in a very spontaneous way, as can be seen from the sketchily drawn figures participating in the feast in the background, expressed in Goya's characteristic loose brushstrokes and markedly impressionist style.