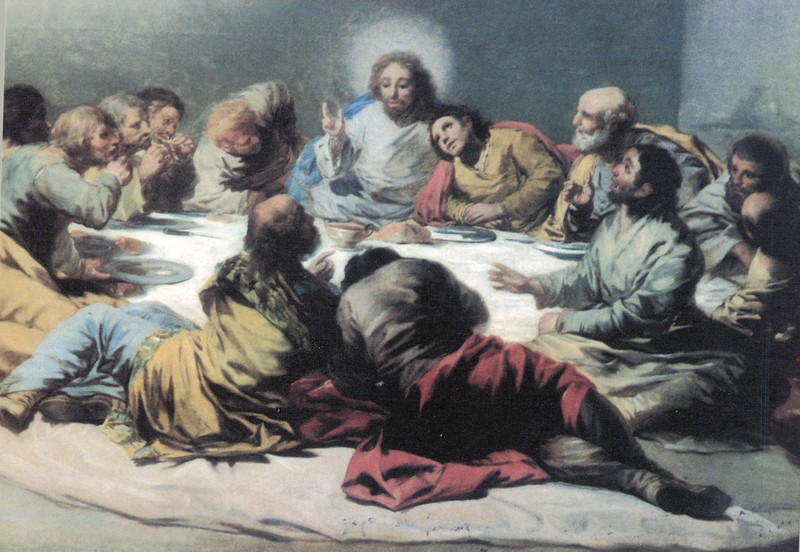 See The Parable of the Guests at the Wedding.

See The Parable of the Guests at the Wedding.

Goya's The Last Supper is located in the centre of the Oratory above the entrance, and is in keeping with the iconographic programme of the Sacrament. It narrates the episode in which Christ establishes the ritual of the Sacrament by blessing the bread.

The circular composition, which is transformed into an oval by the perspective, is due to the shape of the canvas - a flattened semi-circle - which obliged Goya to distribute the figures around the table, including those with their back to the viewer.

Jesus stands out among the other guests at the supper as the main focus of the composition, accentuated by the light which emanates from him. He is highlighted as a divine being in contrast to the other, mortal characters, as in the case of Leonardo Da Vinci's depiction of the same scene. Nevertheless, Goya manages to avoid following conventions in his version of the scene, since Judas does not carry the money bag, and the other characters are rendered with a certain forced crudeness and foreshortening. The varied set of expressive, intense poses in which the apostles are shown - such as the group on the left or Saint John leaning on Christ's shoulder - is particularly noteworthy.

The light comes from the upper left-hand section of the painting where the radiance announces a higher presence, the source of Christ's power. Two apostles are shown with their heads raised towards the light: Saint John and the saint sitting on the right who stretches out his hand in awe of the supernatural presence.

The colours are vivid, and Jesus' tunic is highlighted by a bright white which darkens in the shadows, as in the case of the folds of the apostles' clothing. Colour plays a crucial role in the white of the tablecloth, transforming it into an altar cloth under the bread and wine: outside of the circle of apostles the cloth becomes grey and dull.

The servants blend into the background on the right where there are the most shadows.