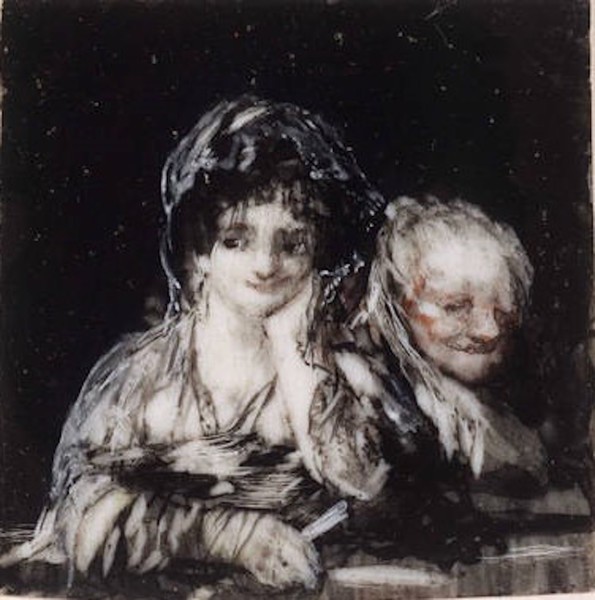 On 20 December 1825, Francisco de Goya wrote a letter to his friend Joaquín María Ferrer, with whom he had spent time in Paris, in which he commented that the previous winter he had been working on a series of miniatures, totalling around forty pieces, painted on ivory.

Not all of these pieces have been located. It appears that some of them were taken to Spain by Javier Goya after his father's death, where they would have been sold, possibly by Javier or by his son, Mariano, to different collectors. Six pieces were sold to Luis Portilla, of Madrid: Maja and Celestina, Three Men Drinking, Man Smoking a Cigar, Man Looking for Fleas in his Shirt, Six Madmen and A Monk Preaching. Edward Habich, from Cassel, acquired nine: Judith Decapitating Holofernes, Susanna and the Old Men, Man Delousing a Little Dog, Bust of an Old Beggar, Monk Talking to an Old Woman, Man Eating Leeks, Two Boys Looking at a Book, A Prisoner on the Ground with his Hands Bound and A Mother and Four Children. Records state that another four miniatures were sold at the Hôtel Drouot auction house, Paris, on 22 February 1937, to an anonymous buyer. Those pieces were Woman with Clothes Blowing in the Wind, Woman Kneeling in the Dark, Two Moors and Boy Scared by a Man. Another two miniatures were sold at Sotheby's of London in 1963, from the collection of Sir William Stirling, in Keir, Scotland. They were Half-Naked Youth Reclining on a Rock and Seated Majo and Maja. Three further works were brought to light by Xavier de Salas. Two of them were published in 1974. These came from the collection of Juan de Muguiro and were Man's Head and Heads of a Boy and an Old Woman. The third one, Man in Despair before a Dead Child, was published in 1979.

The authorship of all of these pieces is not easy to determine since some of them have disappeared and are now only known through photographs, or sometimes not even that (in which case they have not been included in this catalogue).

Antonio Brugada, the young painter who had been close to Goya in the final years of the master's life, told historian Laurent Matheron about the technique that Goya used to make these miniatures. The artist blackened the ivory plaque and then let fall on it a drop of water. This would spread out, lifting away part of the black ground to leave bare spaces, which Goya then used to compose his improvised images. Since he did not use the technique of applying paint in small dots or points, these images have more in common with works by Velázquez than with those by Mengs, just as the artist himself says in the letter he wrote to Ferrer. Studying the pieces, we can see that at times the surface has been scratched to remove some of the paint, leaving the white ivory visible and contributing areas of bright highlight to the images. In general, black is used to define the larger volumes, and creates the atmosphere of mystery that envelops these small-scale caprices. Although in appearance they are very similar to the dark Black Paintings, in their subject matter Goya returned once more to his study of customs and manners. He created many scenes on these ivory plaques but, since the support itself was so valuable, he erased some of them in order to reuse the ivory. The works vary in size and their sides are not always even, but they are all more or less square in shape.

In Maja and Celestina, Goya revisits the theme that he had already represented in one of his balcony paintings, and which shares the same title (rec. no. ?). We see a young woman leaning over the railing, with a cheerful, flirtatious look upon her face. Behind her, the celestina, the procuress, observes the reactions of the men on the street as they see the young beauty on display. The maja's skin is ivory white, standing sharply out against the black background. In addition, there are touches of red on the old celestina's face, and the mantilla that covers the girl's head is of a subdued blue colour.