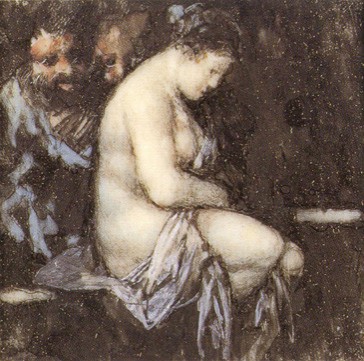 This work was in the collection of Edward Habich, in Cassel. It was put up for auction in Stuttgart in 1899, together with the rest of the miniatures owned by the collector. After the sale it went to form part of a private collection in New York, until 1966, when it entered the collection which currently houses it.

The Old Testament story of Susanna and the Elders is set in Babylon, to where the Jewish people had been deported. Susanna was the wife of a rich man, Joakim, who often invited Hebrews into his home. One day, when the beautiful Susanna was getting ready to bathe in the garden of her luxurious house and whilst Joakim was away, two of the judges of Israel, both of whom secretly desired the woman, appeared and threatened to accuse her of committing adultery with a young man if she would not sleep with them. She refused to be blackmailed but was judged and condemned to be stoned to death. At this point, Daniel appeared and, after cross-examining the judges, the tables were turned, with the two lecherous old men being put to death in Susanna's place.

Here in Goya's miniature, Joakim's wife is shown almost naked, only partially covering herself with a bluish cloth. She is seated, seen in profile, and her head is lowered in an introverted, thoughtful attitude. She does not seem to be aware of the presence of the two old men, who are staring at her lasciviously from just behind her. The flesh of Susanna's body is ivory white, in contrast with the black background. She is squeezed into the composition and it almost seems as though her lowered head is a consequence of the reduced dimensions of the support, a necessary step to make room for the rest of her body. The elders, with their puffy faces, wear blue tunics and have rosy, flushed faces.