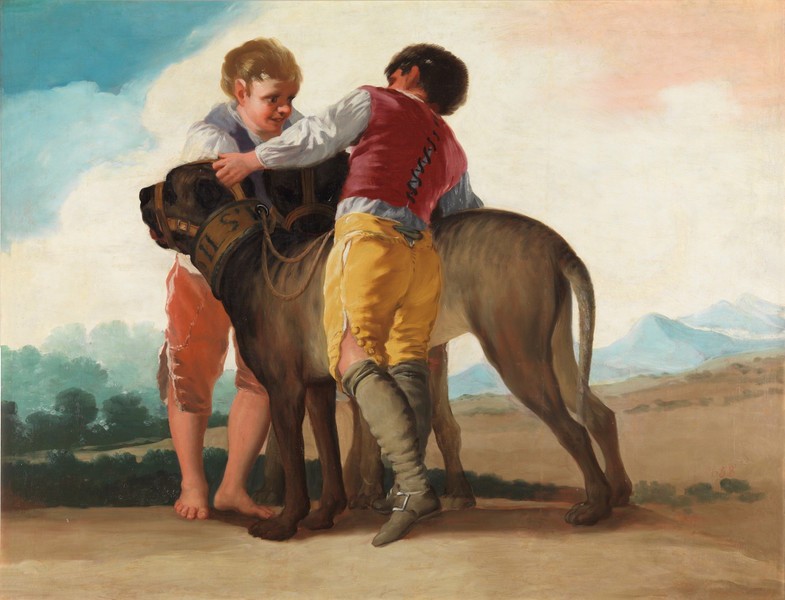 This is one of the six overdoor pieces made to decorate the king's conversation room and which we know of thanks to the account left by the carpenter Josef Serrano, dated 17 November 1786 (see Boy on a Ram). José Luis Sancho is of the opinion, however, that this piece did not form part of the series known as The Four Seasons but was instead part of that called Country Scenes, for the bedroom of the Infantas, in which case the tapestry would have hung on the south wall.

It was included in the inventory carried out by Vicente López in 1834 for Ferdinand VII's will, when it was attributed to José del Castillo.

Around 1856 or 1857, the cartoon was moved from the Royal Tapestry Factory of Santa Bárbara to the Palacio de Oriente in Madrid, and it remained in the tapestry basements until, under orders given on 18 January and 9 February 1870, it was taken to the Prado Museum that same year. For the next sixty years the work was still attributed to José del Castillo, until Valentín de Sambricio documented Goya's authorship.

Two fashionably-dressed boys stand next to two hunting dogs. The animals wear muzzles and are on leads. They have stopped so as to allow the boys to stroke them. In the background, a landscape featuring a far-off mountain range and a copse of trees is cut off by the figures, who appear to be of monumental size owing to the low viewpoint employed by Goya, without a doubt considering the elevated position of the tapestry over the door.

Going by its dimensions and tonal range, it has been assumed that this work would have flanked the main tapestry of The Flower Girls, next to the overdoor piece Boy on a Ram. However, the connection between this piece and the theme of springtime represented in The Flower Girls is not immediately obvious. Tomlinson, who also adds to the theme of the seasons that of the ages of man by comparing these works with a print by Remondini, believes that the boys represented here would have symbolized the age of twenty, although they appear considerably younger than that. A connection with spring and the signs of the zodiac can be found, however, in the same way as in Boy on a Ram, by interpreting the two boys and the two dogs as a highly original representation of Gemini, at the end of the season of spring.

The cartoon has received a number of different names in the various inventories. The main problem has been the correct identification of the dogs. At first, there only appeared to one, a mastiff. But the animals are wearing muzzles, identifying them as hunting dogs and not mastiffs, which would have been used to watch over cattle. As such, here we have opted to use as the main title that which takes this observation into consideration.

José Galiay refers to a sketch of this work in a speech given at the Academia de San Luis de José Sinués, and claims that it was exhibited in the show that coincided with the two-hundredth anniversary of Goya's birth. The current whereabouts of said sketch are unknown.