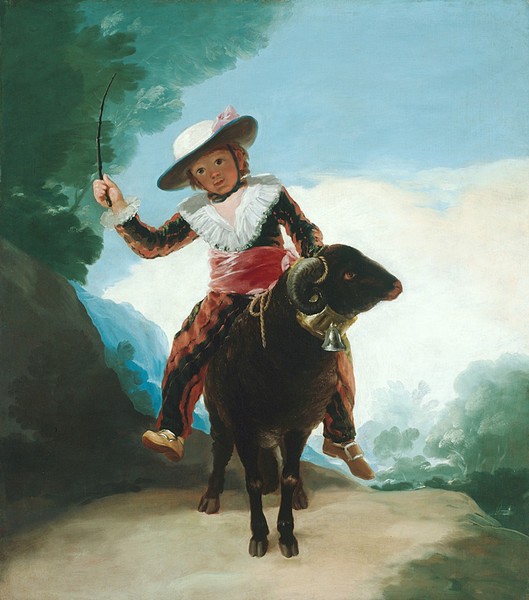 This is one of the six overdoor pieces made to decorate the king's conversation room in the palace of El Pardo and which we know of thanks to the account left by the carpenter Josef Serrano, dated 17 November 1786. The others were Boys with Hunting Dogs, Hunter beside a Spring, Shepherd Playing a Dulzaina, Two Cats Fighting on a Wall and Birds in Flight.

From the Royal Tapestry Factory it entered the private collection of the director, Livinio Stuyck. In 1911 it was sold to the Knoedler & Co. collection, in New York. Later on it was the property of Charles Deering up until 1922, when it found its way into the Chauncey Brooks Mac-Cormick collection, Chicago. Mr and Mrs Brooks donated it to the Art Institute of Chicago in 1979.

The tapestry would have hung on the west side of the room, flanking that of The Flower Girls and forming a pair with Boys with Hunting Dogs.

A boy of around ten years of age, elegantly dressed and clearly belonging to a wealthy family, rides on top of a ram whilst brandishing a branch as an improvised riding whip and advancing towards the viewer. The low viewpoint and the foreshortening, the result of the work having been designed to be viewed from below, bestow upon the figures a monumental quality. In the background, a brightly-lit landscape recalls the one which Goya would later use as the backdrop for several portraits, such as that of The Marchioness of Pontejos.

Some writers consider this cartoon, of which no sketch is known, to be a simple anecdotal representation of a boy at play. Goya's skill in portraying children, capturing their vitality and the candidness of their gaze, as well as the tenderness of their years, stands out here. This was not the first occasion that Goya painted children, and as such this virtuoso display should come as no surprise.

Tomlinson relates this cartoon to spring, due to the presence of the ram, Aries in the zodiac, the first sign of spring. She also sees a clear connection between this well-dressed boy, who resembles Manuel Osorio, and the lower nobility represented in other cartoons made for this same room. She believes that the combined representation of childhood and this unusual mount responds to the zodiacal traditions of the seasons and the ages of man.