This is what you were born for (Para eso habeis nacido) 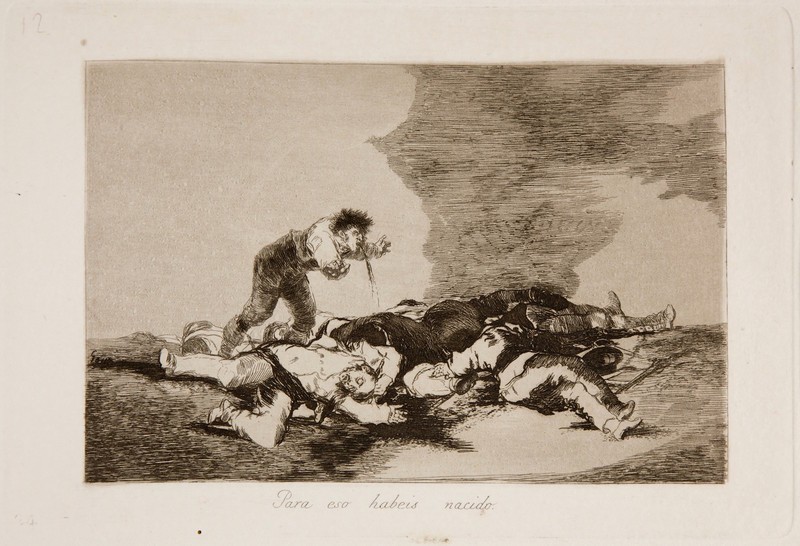 There exists a state proof with drypoint in which the hat on the right-hand side has been made darker. In the next proof, Goya added the signature and some retouching with the burin on the vomiting man. In the following one, he added the lavis work across the entire plate.

There is a preparatory drawing in the Prado Museum, Madrid.

In the middle of an area of open ground, Goya has etched a group of abandoned corpses. The postures of the discarded bodies and the inanimate expressions on their faces add to the horror of the image. Only one living person is shown, the man who is vomiting blood and who will also very soon form part of this mass of lifeless corpses. The scene takes place in an inhospitable, barren landscape; there are no trees or bushes, nor any homes in which to shelter.

The etching has been applied with precision and the hatching seems more elaborate in this print than in others in the Disasters of War series. The clouds in the sky have been rendered using very tightly packed horizontal lines, whilst the rest of the sky has been left as a large area of white.

Enrique Lafuente Ferrari, Valeriano Bozal and Jesusa Vega all relate this etching to no. 16, They avail themselves, nº 18, Bury them and keep quiet, no. 21, It will be the same, no. 22, All this and more, no. 23, The same elsewhere, no. 27, Charity, no. 48,A cruel shame!, nº 62, The deathbeds and no. 63, A collection of dead men, since all of these images feature depictions of piled up corpses.

The etching plate is conserved in the National Chalcography Museum (cat. 263)