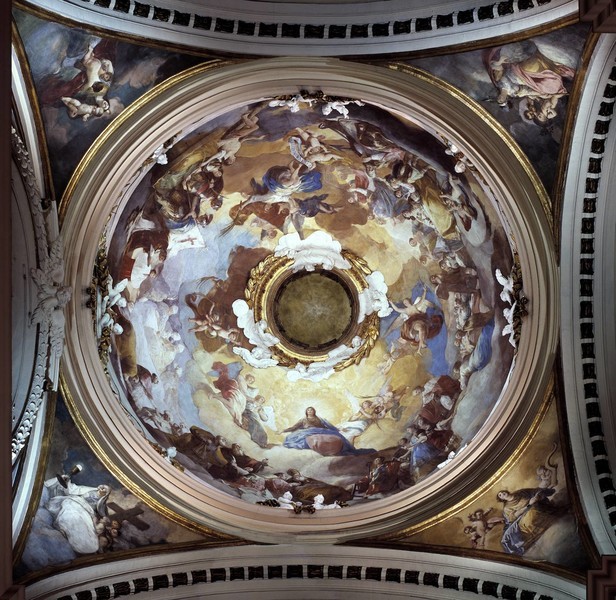 The Metropolitan Chapter of Zaragoza responsible for the Basilica of Our Lady of the Pillar commissioned Francisco Bayeu to decorate the vaults located behind and in front of the Holy Chapel of the church with subjects from the Marian litany or Litany of Loreto (Regina Sanctorum Omnium or Queen of All Saints, 1775; and Regina Angelorum or Queen of Angels, 1776). With the aim of extending this Marian programme to the rest of the vaults surrounding the Holy Chapel, the Chapter entrusted Bayeu to carry out the work with the help of his brother Ramón and his brother-in-law Goya, both of whom were to work under Francisco Bayeu's direction. Francisco painted the circular vaults of Regina Prophetarum or Queen of Prophets and Regina Apostotolorum or Queen of Apostles (1780-1781). Ramón painted the Regina Confessorum or Queen of Confessors, Regina Patriarcharum or Queen of Patriarchs and Regina Virginum or Queen of Virgins (1780-1783). Goya produced the Regina Martyrum, Queen of Martyrs (1781).

Goya's work was assigned a budget of 3,000 pesos. On 5 October 1780, he and Ramón submitted their sketches to the Building Committee of the Chapter of Zaragoza. Goya started work on the fresco at the end of November. On 25 the Canon in charge of the Building Committee, Matías Allué, received the sum of 15,015 reales de vellón to pay for the work and materials.

Goya's painting technique, which was too sketchy for the prevailing classical tastes of the time, led to a bitter confrontation between him and his mentor, Bayeu, who asked the Building Committee to relieve him of the duty of supervising Goya's work. In a meeting held on 14 December 1780 the Committee agreed to release Bayeu from the responsibility, which passed directly to Canon Allué.

On 11 February 1781 Allué informed the Committee that Goya was concluding his work on the cupola and that it was necessary to decide which allegories of the virtues should be depicted in each of the four corresponding pendentives. It was decided that these should be Faith, Fortitude, Charity and Patience. Goya was asked to prepare sketches for the pendentives, which he presented to the Building Committee on 10 March with unfavourable results: "They were not worthy of the approval that we had expected due to some defects that were noticed, and especially with regard to the painting representing Charity, as her figure was less decorous than was appropriate, and the backgrounds of the others, apart from being poorly executed, were also darker than is desirable and not in good taste". It was further agreed: "that Mr. Mathías Allué should inform this Master that since the Building Committee has heard how dissatisfied the public have been with the paintings of the half-dome and given that these [sketches for the pendentives] show neither more care nor better taste than the former ... the matter is left ... by the Chapter under the direction and in the hands of Mr. Francisco Bayeu." Thus, Goya was once more commanded to work under the supervision of his brother-in-law.

In a missive submitted by Goya to the Committee on 27 March, he reveals some new keys to the conflict accompanying the work on the cupola Regina Martyrum. Goya complained that they had tried to make him paint in total subservience to Bayeu: "after having advanced considerably in his work, he was made to know that the agreement with Bayeu was such that the latter should intervene and tell the expositor [Goya] all that he saw fit regarding his work, and that he must obey him like a subordinate in the execution, composition, style, colours and so forth; in other words, be a mere executor and paid assistant. Nevertheless, he was incapable of humiliating himself in such a way." He complained of a campaign to discredit him which, according to his own account, had been waged against his character, "accusing him of being haughty, arrogant, indomitable and proud", and work: "They seek only faults on a whim or out of ignorance". Due to the tension generated by the situation, Father Félix Salcedo, a monk from the Monastery of Aula Dei where Goya had painted some years before, sent a letter to the artist with the intention of reconciling the different parties dated 30 March. In the letter he delicately remonstrated with Goya to be humble and surrender to the Building Committee's demands: "My advice, as your greatest admirer, is that you submit with good grace to the demands of the Committee, take your Sketches to the house of your brother [in-law] and say to him in the best manner possible: ‘This is what the Chapter wants, here they are, peruse them to your satisfaction and write your Opinion to be presented, according to God and to what your conscience tells you." Almost at the same time, on 31 March, the Committee wrote to Goya expressing their regret on receiving the agitated letter that he had written to them on 27 March, reminding him of Bayeu's authority in such matters and demanding that he should seek a reconciliation with him. On 6 April, Goya, swallowing his pride temporarily, wrote to Allué: "Desiring to assure you of my eagerness to serve and please the gentlemen of the Committee and your grace, I will make new sketches for the pendentives in accordance with my brother-in-law, Mr. Francisco Bayeu; if these are approved under the terms established by the gentlemen of the Committee, I will proceed to execute the paintings on the half-dome in exactly the manner my brother-in-law dictates." On 17 April the new sketches for the pendentives were received and approved by the Committee. Goya immediately began the work of painting the fresco, which was finished by 28 May, judging from the official record of the Committee for that day: "The Administrator of the Building Committee said that Mr. Francisco de Goya had been to see him and had said that he had a mind to remove himself to the Court as soon as possible, since here he was only losing his reputation, and to examine what measures should be taken in order that he might be released. The Administrator, once he had suffered his impolite and discourteous conversation and arguments, replied that he would communicate this to the Committee immediately, so as to carry out their will. Once the gentlemen on the Committee had listened to the report, they agreed firstly that the Master should be paid for his work; and secondly, that under no account should he be allowed to continue working on the remaining paintings for the church..." Consequently, Goya was paid the amount owing to him: 45,000 reales de vellón (or 2,390 libras, 12 sueldos and 8 dineros).

The surface of the cupola takes the form of a heavenly glory populated by clouds, angels and martyred saints who accompany the Virgin Mary who is depicted in a prominent position, gazing heavenwards. She is dressed in a red tunic and vast blue mantle; she wears a simple crown above but not touching her head and a transparent white veil spreads over her. Starting from directly below the figure of the Virgin and moving clockwise, we can identify the following saints arranged in grand, monumental groups: Saint Vincent the Deacon, Saint Valerian the Bishop, Saint Lawrence the Deacon of Rome with the gridiron, Saint Engratia depicted with a nail, Saints Nunilo and Alodia, Saint Hermenegild with his crown, a group of the Countless Martyrs of Saragossa, a decapitated Saint Lambert, Saint Eurosia, Saint Catherine on the breaking wheel, the child saints Justus and Pastor, Saint Demetrius, Saint Clement with an anchor, a half-naked Saint Sebastian, Saint Barbara on a tower, Saint Maurice, Saint George with the banner bearing his cross, Saint Stephen the Deacon, Saint Dominguito del Val, the Seven Converts, Simon the Zealot with a saw, Saint Peter Arbues, Saint Indaletius the Bishop and the Apostles Saint Peter with the keys of heaven and Saint Paul with the sword. It is worth noting the large number of important saints either from Aragón or linked to the hagiography of the region.

The cupola has aerial setting characterized by misty forms executed by means of staining. This almost impressionist technique gives the painting an unfinished look. Goya designed the work taking into account that it would be viewed from a great distance, meaning that his detractors - such as Bayeu or the canons of the Chapter ¬- were unhappy with what they saw from the insufficient distance afforded by the scaffolding.

Goya was influenced by the Italian baroque tradition of ceiling painting, whose most distant relative is the renaissance work of Correggio for the Cathedral of Parma and the Church of San Giovanni Evangelista located in the same city.

However, Goya tends towards simpler compositions, reducing the maximum number of figures and focusing on a central group including the Virgin. Opposite that group he places a secondary group containing the angels that hold up the Regina Martirum scroll.