Saturn Devouring One of His Children (Saturno devorando a un hijo) 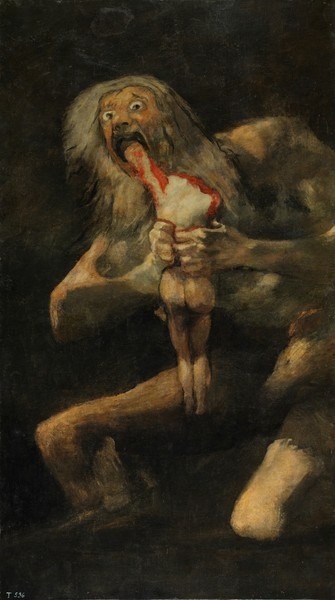 This painting was traditionally thought to have been located opposite Leocadia on the shorter wall of the lower floor of the house known as the Quinta del Sordo, but Glendinning has offered a new theory on its location. Photographs taken before the painting was lifted from the walls seem to reveal a light - possibly coming from a window - which lights up the painting more intensely on the right-hand side, suggesting that the it must have been situated on that side of the room, opposite Two Old Men.

In this painting Goya depicted the mythological subject of Saturn: the god of time who devoured his children when his wife gave birth to them until she was able to prevent him from killing the last, Jupiter, who defeated his father and made him disgorge all his brothers and sisters. The painting depicts the terrible moment when Saturn is dismembering and swallowing one of his children. He seems to crush through the body with the strength of his hands, the blood seeping between his fingers.

The iconographic image is reminiscent of Rubens' work of the same title, although there are differences between the two paintings. Rubens is more respectful of the traditional iconography of the subject, while Goya focuses on the cruel and aggressive side of the god.

According to Nordström, this painting is the starting point of the series that allows us to understand the iconographic programme of the room in which Saturn, the god of melancholy, symbolizes Goya's mood at the time, faced with old age and the illness he had suffered in 1819. Another link with Saturn is that Goya was marked by his sign as an artist and creator.

It is a very simple painting, bordering on the abstract. The intense expressionism of Saturn's face is striking. The face is full of movement, created with strong, vigorous brushstrokes that, according to Gudiol, conceal a perfect drawing underneath. It is a painting of contrasts, since the figure of the god stands out against a dark, neutral, rather unreal background and the red blood also contrasts with the black and grey tones, achieving a gruesome effect.

The expressionism that Goya develops in this painting would serve as an inspiration for contemporary artists: the way he distorts the body and the gestures of his figures as if they were beasts had an influence on 20th-century artists such as Solana or Francis Bacon.

The canvas was lined, and lost its white ground. During the first restoration the work was repainted in various places where the paint had been lost. One of the areas that had suffered the most damage was the eyes, which were repainted.