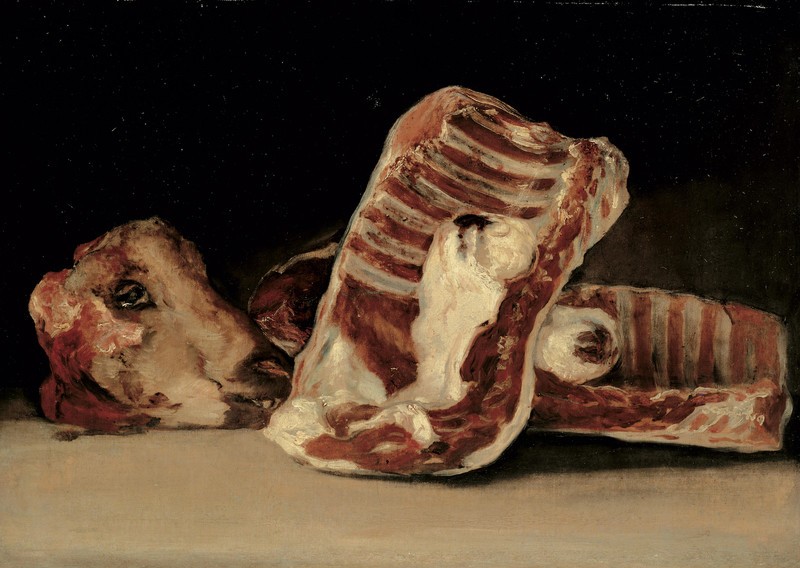 Goya (in small red letters, below the sheep's head).

Traces of the letter X in the lower-left hand corner.

This particular canvas was acquired by the Louvre in 1937.

According to many scholars of Goya's work, the elements which appear in this series of still lifes, which was possibly made during the Spanish War of Independence (1808-1814), are evocations of the many episodes of death and violence that Spain witnessed during those years. The flesh of the animals - inert, discarded material, depicted with a surprising crudeness - could therefore be a reference to the human remains left behind by the violent conflict. Goya perhaps considered the dead bodies of these animals in the same way as he did the human bodies, chopped up and deprived of all dignity, which appear in some of the images in his Disasters of War series of etchings (for example, no. 37, This is worse (Esto es peor), and no. 39, Great deeds! With dead bodies! (Grande hazaña! Con muertos!)).

All of the paintings that make up the series share various formal characteristics which give the set an important sense of unity. In each of them, the animals are isolated from their surroundings, shown in front of a neutral background but drawn out from it by the way the scene is lit.

This series of still lifes represents an important reinvention of the genre, refusing as it did to comply with the way in which themes of this kind had traditionally been treated. We are not, therefore, looking at foodstuffs arranged to decorate and brighten a table; rather, these are dead animals, heaped before us with little care. In these pictures, Goya distanced himself from traditional still lifes such as those by Luis Egidio Meléndez (Naples, 1716-Madrid, 1780) and from the sensuality and opulence of the still lifes of the Dutch painters. In response to the painstaking study of materials and shapes that Meléndez undertook for his works, Goya sets out to capture the whole, which is, in most cases, a mass of lifeless corpses. The only other work to which Goya's series could be linked is The Flayed Ox (1655, Musée du Louvre, Paris) by Rembrandt (Leiden, 1606-Amsterdam, 1669), in which the Dutch artist, just like Goya, has concentrated on the expressive force of the dead matter, later echoed by Chaïm Soutine (Smilovich, 1893-Paris, 1943) in Carcass of Beef (1925, Minneapolis Institute of Arts, Minnesota).

Although we do not know exactly where they were hung, it is believed that these still lifes could have decorated the dining room of Goya's home in Madrid, although they also could have been kept in another room or even in his studio.

In Pieces of Lamb, Goya has painted, on top of a table and in front of a black background, a decapitated lamb's head, turned to face the two crossed slabs of ribs in the centre of the composition, as if looking at them, with an absorbed, impassive, almost resigned expression on its face. The dulled colours and the purplish red help to emphasize the idea of dead meat.

Goya's still lifes heralded the treatment that this genre was to receive at the hands of the naturalist movements of the 19th century. Gudrun Maurer suggests that this painting could have inspired some of the still lifes by Pablo Picasso (Málaga, 1881-Moulins, 1973), particularly the one entitled Still Life with Sheep's Skull (Naturaleza muerta con cráneo de carnero) (1939, Collection of Vicky and Marco Micha, Mexico).