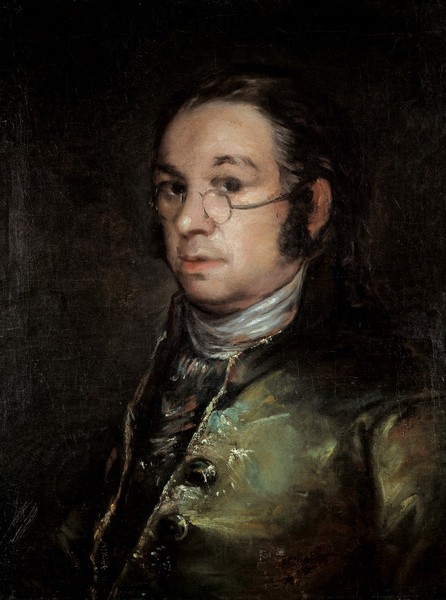 This work was acquired from the collection of don Ángel Terradillos of Madrid by Marcel Briguiboul and donated to the Castres Museum by Pierre Briguiboul in 1894.

This self portrait is striking because the fifty-year-old painter is wearing glasses, perhaps due to the illness he suffered in 1792 which affected his hearing and also debilitated his sight. The artist also depicts himself wearing glasses in the self portrait preserved in the Bonnat Museum in Bayonne.

He is elegantly attired in a green jacket and white tie which is fastened at his thick neck. The white highlights on his buttons give depth and light to the composition. His dense grey hair is combed back, displaying his thick sideburns. He is gazing intensely at the spectator with a serious, tired look, contrasted against the dark background.

Some critics agree that this self portrait is very similar to one which appear in the large canvas Family of Charles IV (La Familia de Carlos IV), painted in 1800.