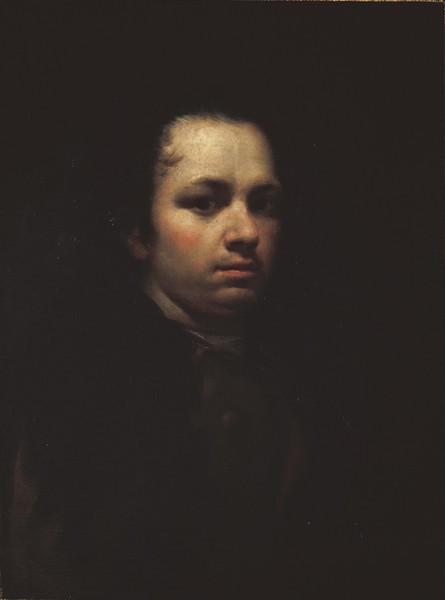 At the beginning of the 20th century, this painting belonged to Mariano de Ena y Villalba and remained in Zaragoza until 1947, when it was sold to the Marquis of Zurgena (Madrid). It became the property of the Marchioness of La Solana in 1955 and later that of the Count and Countess of Elda, who sold it to Ibercaja in 1997.

This is the earliest known self-portrait by Goya. There exist a number of different hypotheses regarding the chronology of this work, with some writers considering it to be a wedding portrait.

Goya depicts himself in a bust portrait and in half profile, looking out at the viewer with an expressive and penetrating gaze. His broad face is selectively lit, showing his rosy cheeks and large head, with his dark head of hair falling loose over his shoulders and blending in with his dress coat and the dark, neutral background.

The portrait is very realistically executed, the pose and mood are pre-Romantic, and we can appreciate a conceptual similarity to the portrait work of Antón Rafael Mengs.

Several copies/replicas of this portrait are known to exist. One of these - mentioned by the Count of La Viñaza - was hung in the gallery of Queen María Cristina de Bourbon. Another, already documented by Carderera, belonged to Zaragoza's casino, from where it came into the possession of the painter Carlos de Haes and finally, after travelling to Paris, arrived at the Saint Louis Art Museum in Missouri (USA), where it is housed for years. Nowadays it is in a private collection.