Serie
Cardboards for tapestries: Hunting scenes (painting, sketches and drawings, 1775). Dining room of the Princes of Asturias, El Escorial (6b/9) 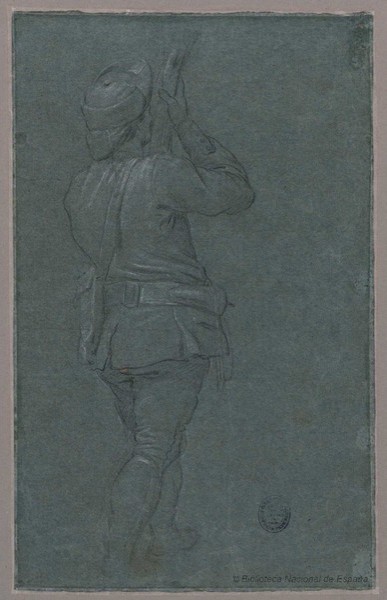 This is a preparatory drawing for the tapestry cartoon Hunting Party. It is the recto of the sketch of the same name.

The sketch belonged to Javier Goya and, subsequently, to Mariano Goya. It formed part of the collections of Vicente Carderera and of Mariano Carderera (the owner's stamp on the drawing is preserved) before passing to the National Library collection.

The two preparatory drawings which appear on the recto and verso of the same page depict the hunters which appear on the left in Hunting Party, the main tapestry cartoon designed for the dining room of the Prince and Princess of Asturias in the Palace of San Lorenzo de El Escorial.

These preparatory sketches are so impersonal that Ángel M. Barcia catalogued them as being the work of Francisco Bayeu. It was Sambricio who attributed them to Goya once again when he linked them to the tapestry cartoon.

Gassier highlights the naturalism of the pose; the stance of the hunter strongly suggests that the work was based on the direct experience of the artist, who was a great fan of the hunt. The sport frequently featured in works decorating the royal residences, a fact which doubtless contributed to the success of this first series of cartoons.

The writer also emphasises the clear lines and modelling obtained with a minimum of materials, although he is also of the opinion that Goya was at that time his brother-in-law's shadow, his own originality as yet unrealized.

Goya would produce further sketches depicting the theme of hunters some forty years later, this time for his own pleasure.