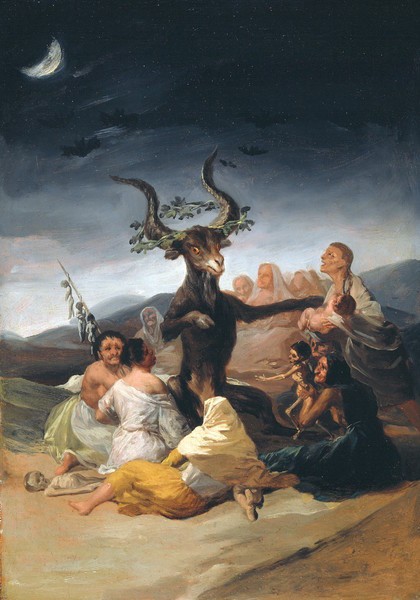 Goya was commissioned to paint this canvas to decorate the country house of the Duke and Duchess of Osuna. It later belonged to the Duke of Tovar, and was acquired by José Lázaro Galdiano in 1928.

In the centre of the scene, a demonic ritual is taking place by the light of the moon. The devil, in the form of a he-goat and wearing a crown of vine leaves, alluding to the iconography of Bacchus, presides over a circle of witches. One of the women is offering him a sacrifice of a new-born baby whilst an old hag presents him with a skeletal child. To one side of the he-goat, another woman has a pole slung over her shoulder, from which several human foetuses hang. Behind the main group, and picked out by a halo of light surrounding each of them, we see another group of female figures dressed in white tunics. Flying in the sky above them are several bats.

It is likely that Goya came across the subject for this painting in the text and humorous commentary which Leandro Fernández de Moratín wrote in 1812 about the auto-da-fé declared in Logroño in 1610. According to the inventory that was made of it in 1823, the Duke and Duchess of Osuna's library included a copy of Fernández de Moratín's text. It tells the story of two women who poisoned their children, after having been told to do so by the devil. Goya's painting also depicts the popular view held at the time that witches would often suck the blood of children, leaving them in such a weakened state that little could be done to save them.

This canvas, which openly criticizes superstition and ignorance, is related to a number of etchings sharing this same objective in the Caprices series: no. 47, A Gift for the Master and no. 60, Trials, in which human foetuses and the figure of the he-goat also appear.

The reclining female figure with her back to the viewer in the foreground of this painting, and under whose blanket another child is hiding, with only his legs visible, bears a strong resemblance to the drawing that appears on page 6r of Goya's Italian Sketchbook (Cuaderno italiano) (1771-1793, Prado Museum, Madrid). This drawing, a study in rendering drapery, depicts a completely covered figure and shows the influence of Salvator Rosa (Naples, 1615-Rome, 1673). Goya may have seen the work of this artist, who also regularly dealt with themes of magic and the supernatural, during his stay in Italy (1769-1771).