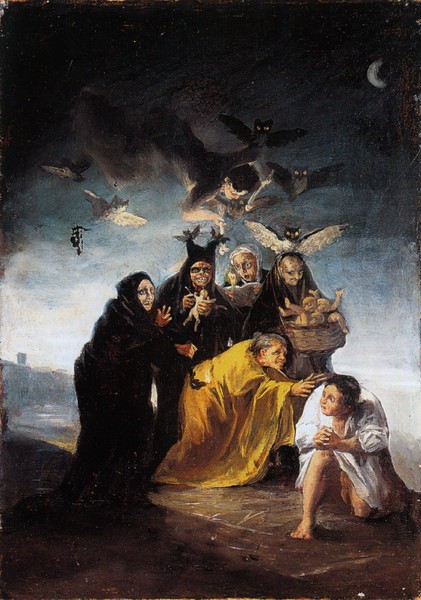 Goya was commissioned to paint this canvas to decorate the country house of the Duke and Duchess of Osuna. It later belonged to the Duke of Tovar, and was acquired by José Lázaro Galdiano in 1928.

In the middle of the night, a group of old witches practise their magic upon a terrified man, who is dressed only in a white nightshirt. One of the witches chants by candlelight, and another, with an owl perched on her head, holds a basket full of babies. On the other side of the group, a third witch sticks pins into a wax effigy, whilst two bats cling on to her robe, lifting it up. In the centre of the composition, an old crone with a yellow tunic gropes her way towards the crouching man. At the top of the painting, and left largely unfinished, we see a figure looking down over the scene, holding some bones in his or her hands. Some have identified this figure as the devil, whilst others say it is the queen of the witches' coven. Also in the sky are a number of bats and owls in flight.

The composition of the painting is formed by two equilateral triangles, joined by the circle in the centre formed by the main figures. This arrangement, the same one which Goya used in the work known as Berganza and Cañizares or The Witches' Kitchen, brings to mind the Seal of Solomon, a magical symbol often used in witchcraft, to summon the devil or to cast a spell upon an enemy.

According to Marina Cano, the dramatic effect of this composition is heightened thanks to the way in which Goya has used colour: starting out from a layer of black paint which covers the entire canvas, he has applied the colours only to create the areas of light, leaving the rest in darkness.