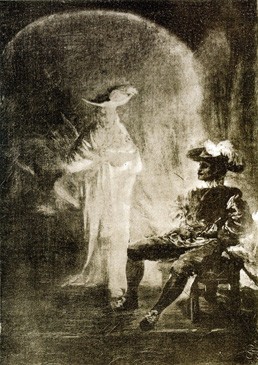 This work was last seen in 1896 at an auction to sell off the estate of the Duke and Duchess of Osuna.

In this painting Goya depicts a scene from Act III of Antonio de Zamora's (Madrid, 1665-Ocaña, 1727) comedy There is no Deadline Left Unmet and no Debt Left Unpaid, and the Stone Guest (No hay plazo que no se cumpla ni deuda que no se pague, y Convidado de piedra), which was performed with great success in Madrid each year between 1784 and 1804. Moratín, who knew Zamora's reworking of the legend of Don Juan, could have recommended it to Goya for one of his paintings. It is also possible that the Aragonese artist, himself an enthusiastic theatre-goer, had seen the play and decided to make a painting based on this part of it.

After killing the commander, Gonzalo de Ulloa, Don Juan challenges a statue of the man and invites him to have dinner at his house. In turn, the statue responds with an invitation of its own, to visit the crypt of the Ulloa family, where the scene depicted in this painting is set.

At the back of the composition Goya has painted an arch, perhaps meant to represent the Ulloa family chapel, below which we see the stone figure of the commander. As this phantasmagorical figure approaches him, Don Juan calmly sits, his hands on his hips in a gesture of defiance. Don Juan, unrepentant of his actions, will be dragged down to hell to receive his punishment, represented in this painting by the flames behind him.

In terms of its subject matter at least, this painting is quite different to the others in the series of works for the Duke and Duchess of Osuna. Here the contrast between reality and the imaginary is not used to criticize superstition, with the moral consequences of sin being illustrated instead. Frank Irving believes that Goya made this painting, The Stone Guest, to conclude this series.