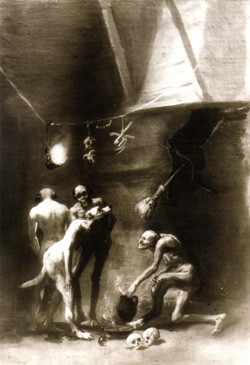 Goya was commissioned to paint this canvas to decorate the country house of the Duke and Duchess of Osuna.

According to writer Frank Irving, this work, erroneously known by the title of The Witches' Kitchen (La cocina de las brujas), should in fact be called Berganza and Cañizares (Berganza y Cañizares), since it represents those two characters from one of the Exemplary Stories (Novelas Ejemplares) of Miguel de Cervantes (Alcalá de Henares, 1547-Madrid, 1616): The Deceitful Marriage and The Dogs' Colloquy. Assuming this is true, this painting by Goya would be based on what is one of Spanish literature's most famous episodes of witchcraft, and would represent Cervantes' tale with only minor modifications.

The principal characters in the painting therefore are the dog Berganza and the witch Cañizares, who is explaining to the dog how to summon demons and make magic potions which give the power of flight. In the centre of the composition we can see the witch, with one leg kneeling on the floor and the other, which more closely resembles that of a goat, at a right angle. Her left hand is reaching into the jug in front of her whilst Berganza the dog, standing and with the left leg and right arm of a human being, watches as a billy goat flies off on a broomstick up the kitchen chimney, the place where magical rites were usually performed. The two figures standing on the left-hand side of the composition have been summoned by the witch and transformed into demons. Above them hang bones and skulls, as well as an oil lamp which lights the scene.

The message which both Cervantes and Goya set out to communicate with this scene is that a person's imagination is capable of altering their sense of reality.