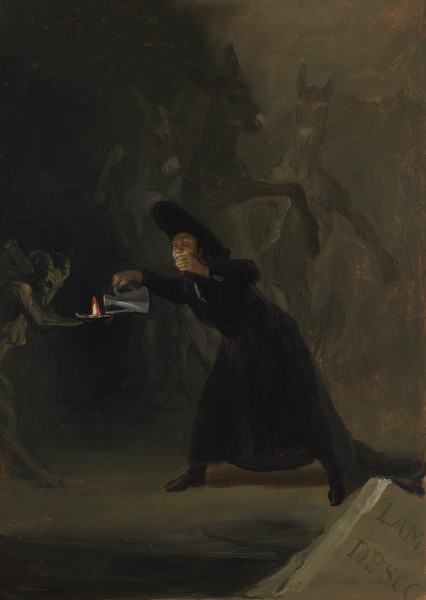 This work was purchased by the National Gallery in London in 1896.

The painting is based on a scene from Act II of the comedy The Forcibly Bewitched (El hechizado por fuerza), by Antonio de Zamora (Madrid, 1665-Ocaña, 1727), a very popular play in Goya's day. It was performed in Madrid around the same time as Goya was painting this series of works for the Duke and Duchess of Osuna, who were themselves enthusiastic theatre-goers and would have known Zamora's play well. According to Frank Irving, it may have been Moratín who recommended that Goya paint this particular scene, in the course of one of the literary gatherings which both men regularly attended at the home of the aristocrats who commissioned these paintings.

The picture shows the figure of Don Claudio, an Asturian cleric who believed himself to have been bewitched and who thought that his life depended on keeping an oil lamp burning, the same lamp held here by the devil in the form of a he-goat. Whilst he refills the lamp with oil he prays that the evil spell not come true. In the book shown in the extreme foreground we can read the fragments "LAM/DESCO" (from "Lámpara descomunal", or "Monstrous lamp"), in reference to the first two words of the monologue that the character of Don Claudio addresses to the lamp: "Monstrous lamp / whose vile reflection / just like a wick / sucks up my life's oil / ...".

At the back of the composition, three donkeys, painted with loose brushstrokes, are standing up on their hind legs and dancing. They represent the moment in the play when Don Claudio, walking across the room, says: "A dance here can be / seen, although not very well, / Of donkeys; I know who / Could join this dance".

With this work, Goya was commenting on how an unbalanced mind can end up turning fantasy into reality, and vice versa, and in this way brings to mind the content of his Caprices series of etchings.