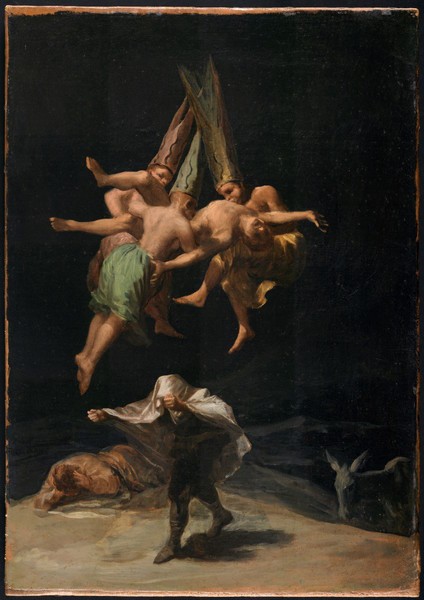 Goya was commissioned to paint this canvas to decorate the country house of the Duke and Duchess of Osuna. It was later sold and has belonged to several different collections, including those of: Ramón Ibarra, Madrid; Ibarra, Bilbao; Don Luis Arana, Bilbao; and Sotheby's - Peel, Madrid. In 1985 it was acquired by J. Ortiz Patiño. In 2000 it went under auction at Sotheby's in Madrid and was acquired by the Prado Museum with funds from the Villaescusa legacy.

Between 1797 and 1798, Goya made a series of six small paintings about the world of witchcraft and the supernatural for the Duke and Duchess of Osuna. They were used to decorate the Osuna's new country house, known as El Capricho, in La Alameda. An invoice from Goya to the duke, dated 27 June 1798, reads: "[A] total of six paintings on themes of Witches, in La Alameda, six thousand reales".

Depictions of witches and witchcraft were very popular among the higher classes of Spanish society at the time, which explains the commissioning of this work and also tells us that it was not such an unusual one. The Duke and Duchess of Osuna, as well as being important patrons of the visual arts, were also very well-read. We also know that the duchess's mother, Doña Faustina, was fascinated by esoteric and supernatural themes. On at least one occasion she invited William Thomas Beckford (Fonthill, Wiltshire, 1760-Fonthill, Wiltshire, 1844), author of the Gothic novel Vathek (1786), to her home.

Frank Irving Heckes is of the opinion that Goya intended this painting to be the first in the series. According to this specialist, the work should in fact be entitled The Master Lucas (El dómine Lucas) (1716), since this work by Goya is an imaginative and highly personal representation of a scene from Act II of the comedy of the same name by the playwright José de Cañizares (Madrid, 1676-Madrid, 1750).

In front of a completely black background we see a figure trying to flee the scene. He is covering his head with a white cloth and making a gesture with both hands, presumably in an attempt to ward off evil spirits. On the left-hand side, another terrified figure cowers on the ground, with his hands over his ears. In the lower right-hand corner we can make out a donkey, a recurrent element in the iconography of Goya and one which was used to symbolize ignorance. Above them, Goya has represented the figments of the men's imagination and the object of their fear: three bare-chested figures, wearing conical corozas (symbols of the Inquisition) on their heads and floating in mid-air. Two of them are sucking the blood of another, naked man, who they have lifted high up into the air.

The motif of a terrifying figure bearing down over a recumbent victim also appears in Henry Fuseli's famous painting entitled The Nightmare (1781, Detroit Institute of Art), exhibited at the Royal Academy in London in 1782. Fuseli's image inspired both Thomas Burke (in a print published in 1783) and Nicolai Abraham Abildgaard (The Nightmare, 1800, Vestsjællands Kunstmuseum, Sorø, Denmark) to produce their own versions, and with the very same title. This image was reused by Goya in plate no. 72 of his Disasters of War series of etchings, entitled The Consequences (Las resultas).

This painting also bears certain similarities to some of the images in the Caprices series, and in particular to plate no. 50, The Chinchillas (Los Chichillas), which was probably also based on a scene from the play The Master Lucas.