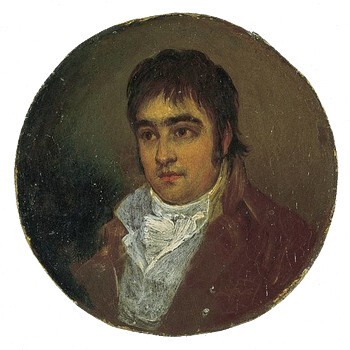 Goya made seven miniature portraits, all on sheets of copper and with a circular format, for the wedding of his son, Francisco Javier, to Gumersinda Goicoechea, which took place on 5 July 1805.

This piece was in the collection of Alejandro Pidal, in Madrid.

Martín Mariano de Goicoechea was the father of the bride. He is depicted wearing a brown frock coat, underneath which a white shirt is visible, covering him up to his chin and helping to conceal his girth.

Before a background that, although neutral, is not as dark as those of the other miniatures in the series, this character's large head and wide face stand out. His gaze is directed off to his right.

The thick impasto brushstrokes of his tie contrast with the delicate and flat treatment of the face.

The great sensitivity shown by the subject reveals Goya's familiarity with his sitter.