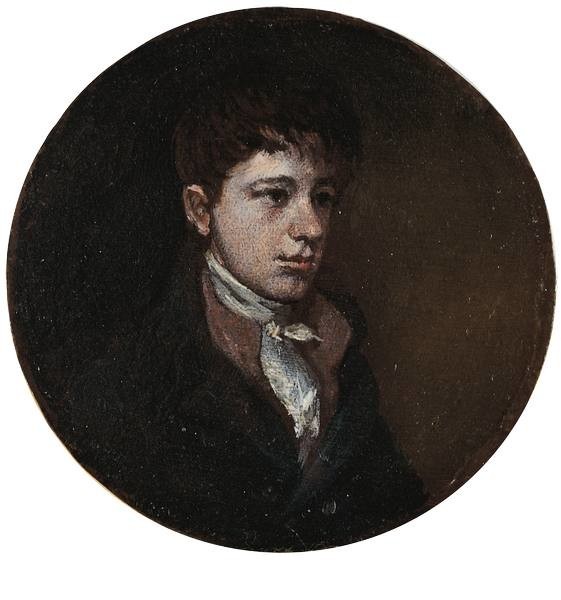 Goya made seven miniature portraits, all on sheets of copper and with a circular format, for the wedding of his son, Francisco Javier, to Gumersinda Goicoechea, which took place on 5 July 1805. As well as this portrait of his son, he made ones of the parents of the bride, the bride herself, and her three sisters.

The portrait of Javier Goya has belonged to a number of collections: Alejandro Pidal, Madrid; Salas Bosch, Barcelona; Goupil, Paris; and Bergerat, Paris.

It was acquired by the Museum of Zaragoza in 2003.

This appears to be the first time that Goya used the technique employed in this work, using a thin sheet of copper covered by a thick layer of reddish primer, over the top of which the artist applied thin, precise brushstrokes in the execution of the portrait, applying the same techniques that he used in his paintings on canvas.

Javier Goya, born in 1784, was the only surviving son of the seven children that the painter had with his wife, Josefa Bayeu. He is not known to have had any profession and, although it appears that he wanted to become a painter, there is no record of any works by him, which over time would have provoked the disillusionment of his father.

All of the decorative medallions are characterized by a profound psychological insight into the subject. Here, Javier Goya appears from the shoulders up, with his head slightly turned to the left. He is wearing a buttoned-up frock coat and a turned-up collar, revealing the white shirt that covers him right up to the chin. His hair, brushed forwards, blends into the dark tones of the background. His youthful face (Javier was seventeen years old when Goya painted this portrait) appears both melancholy and annoyed at the same time.

According to Manuela Mena, this portrait of Goya's son is the only one in the series in which the figure is dwarfed by the space around him, and whose gaze and posture reveal something of the weakness of his character.