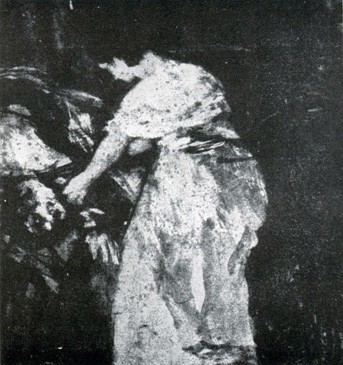 This work formed part of the collection of Edward Habich, in Cassel, together with a number of other miniatures. It was auctioned in Stuttgart by Gutekunst between 27 and 28 April 1899 (lot number 302). It was sold again at Christie's of New York on 31 January 1997 (lot number 219), going into a private collection.

The story of Judith and Holofernes is one of the more popular biblical themes with artists. General Holofernes, sent by Nebuchadnezzar to punish those peoples who had refused to join up with Babylon, laid siege to the city of Bethulia, where the Hebrews were trapped. Judith ended the siege by deceiving the general with her beauty. He invited the young woman to a banquet and, once he had fallen down drunk with wine, Judith cut off his head with his own scimitar, thereby freeing her people in the name of God (Judith, 13:7-9).

The most commonly represented moment of the story is that of the beheading itself. This was not the first time that Goya had painted the subject, as his work Judith in the Black Paintings series testifies. Unlike that wall painting, however, the Judith of this miniature has her back to the viewer as she readies herself to deliver the killing blow to the sleeping Holofernes, whose face is visible on the left-hand side of the composition.