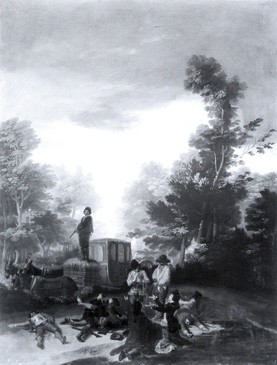 The Duke and Duchess of Osuna paid 3,000 reales for this painting.

Goya's description on his bill read: "2....some thieves who have hijacked a coach, after having overpowered and killed the drivers and an officer, who fought back bravely, prepare to tie up a woman and a man, with its corresponding landscape". The subject of a hijacked coach was depicted by Goya on several occasions. In Spain at the time it was a common occurrence. Many bandits even became hero figures thanks to popular legends, which sang their praises, claiming that they only robbed from the rich. Yriarte mentions a real event related to this scene which happened in the area surrounding the inn of the Espíritu Santo, not far from La Alameda de Osuna.

Goya represents this particular hijacking with a somewhat theatrical, even comical, flourish, with no heroic acts on either side. The bandits have shown no mercy, with two lifeless corpses bleeding onto the road and a third being stabbed at this very moment. With the drivers dead, the man and woman owners of the carriage, kneeling on the ground dressed in majo clothing, plead for their lives. The leafy woodlands framing this scene of pillage and murder take on great importance, as in all the works in the series, with their imposing presence and lush green vegetation.