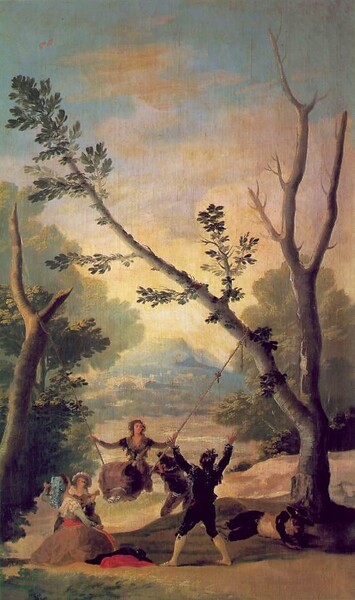 This painting cost the Duke and Duchess of Osuna 2,500 reales.

The description for this work read: "3. ...some gypsies amusing themselves, pushing a gypsy girl on a swing with two more sitting watching and playing the guitar, with its corresponding landscape". The landscape that Goya mentions would have been in the vicinity of the Duke and Duchess' property of "El Capricho". Here, a beautiful young woman sits on an improvised swing, the ropes of which are tied to a pair of trees. Nothing seems to indicate that these figures are gypsies, and it has even been suggested that the young woman on the swing could be a portrait of the Duchess of Osuna herself. It was common for people from the upper classes to dress up in the popular clothing of majos and majas, and this is most probably what the artist is representing here. It is an example of the fun and games that the guests of the Osunas would have enjoyed when visiting the country house of Goya's noble patrons.

The painter already used the theme of the swing as a countryside amusement in the tapestry cartoon he painted in 1779 for the antechamber to the bedroom of the Prince and Princess of Asturias in the palace of El Pardo. Returning to the theme here, he pays particular attention to the surrounding landscape, which dominates the painting, reducing the figures down to a smaller scale.