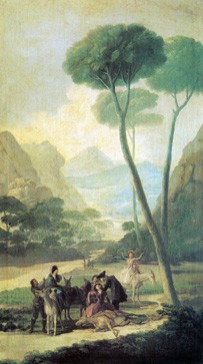 Goya was paid 2,500 reales for this painting.

Goya's description of this painting read: "5. ...a procession through mountainous terrain and a woman who has fallen from a donkey, being helped by a monk and another man who is holding her in his arms, and another two women behind showing their concern with a servant, forming the main group, and others who have stopped and can be seen in the distance, with its corresponding landscape". In this tall, narrow scene, the landscape, this time mountainous and featuring tall pine trees, once again dominates the composition. Here it is no longer a background landscape but instead actually envelops the figures, becoming their stage. The action narrated by the artist is again something that may have been commonplace on the journey to and from the country house of the Osunas, as if the work described a real memory. In fact, some writers have put forward the idea that the figure on the left-hand side, consoling the woman who is covering her face with a handkerchief, possibly the Duchess of Alba, is a self-portrait of Goya. Regardless of the identities of the figures, the work evokes both the pleasures of the great outdoors and the consequences that such pastimes sometimes result in.