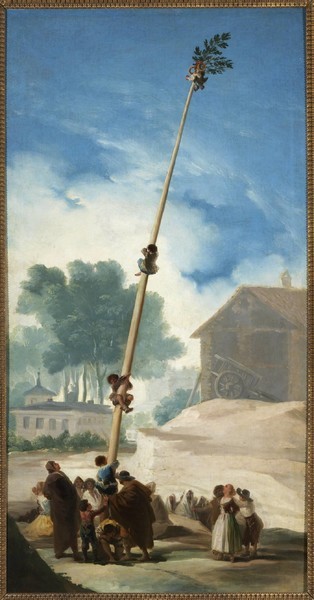 In 1786, the Countess-Duchess of Benavente and Duchess of Osuna commissioned Goya to paint a series of paintings of popular, countryside themes for her cabinet in "El Capricho" ("The Caprice"), the country house that she had built in 1783 on the outskirts of Madrid, in the area known as La Alameda de Osuna. In addition to the painting shown here, the series included six more: The Swing, The Fall, Stagecoach Hijacking, Village Procession, The Moving of a Stone and Rounding up the Bulls.

All seven paintings were delivered on 22 April 1787, together with a portrait of the three children of the Osunas, which has since been lost. Goya presented his bill, for a total of 22,000 reales, on 12 May of the same year. On it, the price of each painting was specified, along with a brief description. This particular painting cost 2,000 reales.

When the ducal household went bankrupt in 1896, these paintings were put up for sale. Some of them, specifically The Greasy Pole, The Swing, The Fall and Stagecoach Hijacking, were acquired by Felipe Falcó y Osorio, VIII Duke of Montellano, for his Madrid collection.

In 1965, The Greasy Pole was purchased for the Várez Fisa collection.

This series of paintings recalls some of the similarly themed tapestry cartoons made by Goya, such as the series made to adorn the dining room of the Prince and Princess of Asturias in the palace of El Pardo. The scenes are, in the most part, pleasant and amusing; situations that the paintings' owners could themselves experience at their countryside retreat. However, two of the paintings, Stagecoach Hijacking and The Fall, although maintaining the rural setting of the rest of the series, depict much less pleasant, and even dramatic, scenes, in which Goya took the opportunity to speak of the problems of the period, as he would later do on so many other occasions.

The description of The Greasy Pole as it appeared on Goya's bill went as follow: "6. Another painting that represents a maypole, as in a village square, with some boys climbing up it to win a prize of chickens and roscas [ring-shaped cakes] that are hanging from the top, and several people watching, with its corresponding background". This is the painting with the narrowest format in the series, and its composition, dominated by the marked verticality of the maypole, fits perfectly. The pole starts in the lower left-hand corner of the painting and extends up and across to the upper right-hand corner, tapering and bending under the weight of the boys who are climbing up it to reach the prize, which is decorated with a red ribbon. Safe on solid ground at the bottom, a group of people are watching the proceedings. Some men are helping the brave participants to climb the pole whilst a woman, dressed as a peasant, shows her concern with a worried gesture. We can also make out an upper-class lady, dressed in blue bodice and golden skirt, half hidden behind the group of men. In the background of the scene we see a farmhouse on the right-hand side and, on the left-hand side, the Osuna's little neoclassical palace itself, set amidst a leafy copse of trees.

Goya has represented each figure with its own individual pose, contributing an air of naturalism to the scene. Despite the entertaining subject matter of this image, it has been suggested that Goya may have been alluding to the poverty and strife suffered by the peasants, as reflected in the hay wain that stands empty next to the farmhouse, and the fact that the peasants must run the risk of dangerous games such as this one just to get their hands on some bread and chickens.