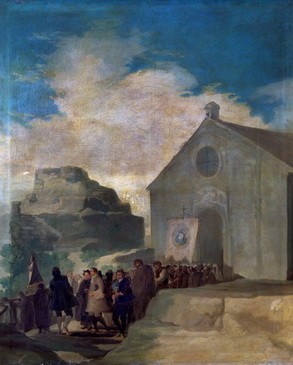 This work was purchased from the Duke and Duchess of Osuna, at the auction of 1896, by the Marchioness of Villamejor. It was inherited by her son, the Count of Romanones. It changed owners again in 1950.

This painting originally cost the Duke and Duchess of Osuna 2,500 reales.

Goya described this painting as: "4.... a village procession, the main or foreground figures of which are the Priest, Mayor, Alderman, Bagpiper, etc. and retinue, with its corresponding landscape". This was the first time that Goya had addressed the topic of processions. He was to return to them a couple more times later on in the works A Procession of Flagellants and Flagellants next to an Arch, although on those occasions he was to accentuate, almost to the point of satire, the picturesque character of the spectacles and their ecstatic participants. Here we see no such evident critique. The procession is led, just as Goya wrote in his description of the work, by the village's priest and mayor, that is to say the two local authorities who needed to be present in this procession which, rather than an act of faith, was a social commitment in the Spain of the time.

The composition is dominated by the chapel from which the procession is emerging, its volume kept in balance by the presence of the castle ruins on the right-hand side. Of particular interest are the harmonious colours of the image, featuring chiefly green and ochre tones.