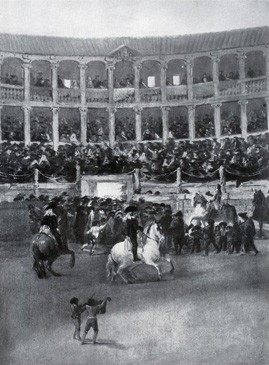 This work was painted during Goya's stay in Cádiz and was donated to the Royal Academy of Fine Arts of San Fernando, Madrid, in January 1794.

The scene is set inside a bullring, featuring two levels of boxes built over the top of the stands. According to Gassier, this is the bullring of Madrid, built nearby the Plaza de Alcalá during the reign of Ferdinand VI. Five of the eight paintings in this series are set in bullrings which are very similar in appearance to this one.

The clearing of the bullring took place before the bullfight and consisted in clearing the ring of all obstacles, leaving it ready for the fight. This task was carried out by the officials known as alguaciles, mounted on horseback. Also visible in this painting are a group of people leaving through the gates and two young men, standing apart from the others, in the foreground.

The crowd in the stands has been depicted using deft, light touches of the brush. Despite the tiny dimensions of the figures it is possible to make out with a certain amount of clarity the hats worn by the men and the white mantillas of the women.

For more information, see Bulls in the Meadow .