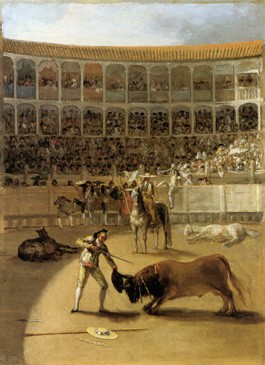 This work was painted during Goya's stay in Cádiz in 1793 and delivered in January of the following year to the Royal Academy of Fine Arts of San Fernando, Madrid, where, according to De Salas, it remained for some time. It later went to the collection of the Duke and Duchess of Medinaceli.

It has also belonged to the collection of Ceán Bermúdez, Marquis of La Torrecilla, and that of the Duchess of Cardona.

In a bullring which may be that of Madrid, the matador prepares to deliver the killing blow at the end of the fight. In the centre of the composition, in the foreground, the bullfighter holds aloft his sword, about to thrust it into the bull, whilst using his hat in place of his cape to distract the animal. According to Gassier, this image of a matador approaching the bull just prior to killing it can be seen repeated in Goya's Bullfighting (Tauromaquia) series of etchings, and most notably in plate number 18, entitled The Daring of Martincho in the Ring at Zaragoza (rec. no.).

Behind the matador and the bull, two horses lie dead on the ground, and between them a picador on horseback contemplates the scene. In front of and behind the barrier, some members of the bullfighter's team discuss the fight, whilst others watch on, waiting for the final blow. The stands, which are almost entirely in shadow, are filled with attentive spectators.

The light coming from the right-hand side illuminates a portion of the stands and part of the ring itself, inviting our gaze to fall back onto the figure of the matador. This lighting also creates a somewhat theatrical atmosphere, magnifying the drama of the matador's pose and the importance of this exact moment.