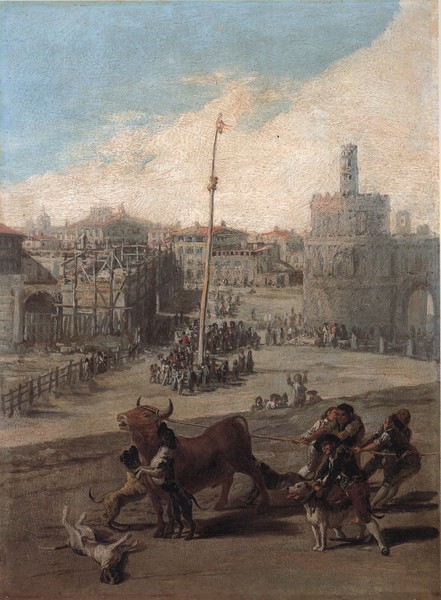 This painting arrived at the Royal Academy of Fine Arts of San Fernando, Madrid, in January 1794.

The scene takes place on the outskirts of a city, which may be Seville given the similarity of the tower shown on the right-hand side to the famous Torre del Oro in that city. Alternatively, it could be a city dreamt up by Goya. Some of the buildings are still under construction, as the scaffolding around the structures on the left-hand side of the composition shows us.

In the foreground, a group of men accompanied by their dogs attempt to capture a bull and have already managed to get a rope fastened around the animal's horns. The bull resists, pulling away with its head whilst two of the dogs jump up at its neck. It is a scene with a certain degree of drama: the bull, whose anguish the artist has captured perfectly, appears to have just knocked down one of the dogs, shown lying sprawled out on the ground.

In the background we can see a cucaña, or greasy pole, which a figure is climbing and is about to reach the top of, under the attentive gaze of a group of people who have gathered to watch the spectacle.

Goya has painted the line of shadow with which the painting is divided in two very distinctly: the first part contains the scene of the bull being roped, and the second shows the drama of the figure climbing the greasy pole. Arranged along this dividing line is a group of five people, all watching the roping of the bull, and one of whom is raising his hands in the air.

The artist has painted the figures in the foreground in much greater detail, depicting everything in the more brightly lit area behind in a more superficial manner and blurring the outlines of the buildings.