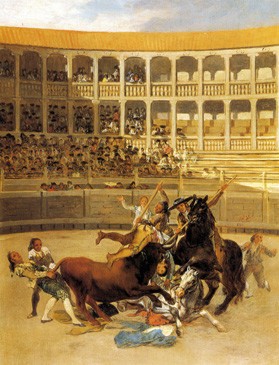 This work was painted during Goya's stay in Cádiz. In January 1794 it arrived at the Royal Academy of Fine Arts of San Fernando, Madrid.

After forming part of the collections of Ceán Bermúdez and Lefort it belonged to those of Cotnareanu, in New York, and Coty, in Paris.

This is the most tragic scene depicted in the series on bulls and bullfights that Goya painted in 1793. In the middle of a chaotic tangle the bull has caught a picador, impaling him on one of his horns, which can be seen entering his belly and coming out through his buttock. Underneath the bull's raised forelegs we see the fallen horse of the mortally wounded picador. A second picador, riding a black horse, attempts to bring the animal down whilst two other men have the bull by its tail, and are pulling with all their might. But all of their efforts to prevent the tragedy are in vain.

In the background, the stands are partially illuminated. The part in the sun is empty whilst that in the shade is completely packed with spectators. It is possible that the crowd had moved in order to be in the relative cool of the shade, or perhaps this scene is not set on the same day as the other paintings in this same series.