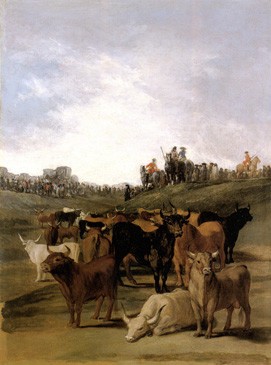 This work was painted during Goya's stay in Cádiz and was donated to the Royal Academy of Fine Arts of San Fernando, Madrid, in 1794.

In 1792, when he was working for the Royal Tapestry Factory of Santa Bárbara, Goya left Madrid to spend some time at the Cádiz residence of his friend and ilustrado Sebastián Martínez y Pérez (1747-1800). Martínez y Pérez, a collector of prints and paintings and the owner of an impressive library, had his portrait painted by Goya during this period (1792, Metropolitan Museum of Art, New York). Soon after arriving in Cádiz, Goya began to feel the oncoming symptoms of an illness which remains a mystery to this day, and which he may have contracted in Seville. It was to leave him permanently and profoundly deaf.

Goya, who stayed in Cádiz until the following year, 1793, devoted his convalescence to painting small-format, non-commissioned works, in which he could give free rein to his imagination, with absolutely no restrictions. They are paintings in which, as Goya himself points out in a letter he wrote to Bernardo de Iriarte, he could permit himself "to make observations which do not often occur in commissioned works, in which caprice and invention are restricted".

This set of paintings made during Goya's stay in Cádiz were presented in January 1794 at the Royal Academy of Fine Arts of San Fernando, of which the artist had been deputy director of painting since 1785, perhaps with the goal of showing that he had continued to work during this period and thereby demonstrate that his abilities remained undiminished.

Goya was not the only artist to represent scenes of bullfighting around this time, with his oil paintings of bulls and his Bullfighting (Tauromaquia) series of etchings having at least two relevant precedents. One of these was the work of Antonio Carnicero (Salamanca, 1748-Madrid, 1814) and consisted in two series of prints of bulls, executed between 1787 and 1790: Collection Illustrating the Principal Stages of a Bullfight (Colección de las principales suertes de una corrida de toros). The second precedent was a set of anonymous illustrations made for the 1804 edition of Tauromachy or The Art of Bullfighting on Horseback and on Foot (La tauromaquia o el arte de torear á caballo y á pie).

In this particular work by Goya, the artist has painted a group of bulls in a field, one them lying down in the foreground. They are probably waiting to be sent to the bullring by the men shown on horseback at the back of the scene. Another group of people, on the left-hand side, are watching the proceedings.

Goya has depicted the bulls themselves in considerable detail, whereas the crowd, which appears blurred and out of focus, is painted in a much looser manner. This serves to emphasize even more that the animals are the undeniable focus of the painting. The top half of the picture is taken up by the sky, partially filled by clouds.

All throughout his life Goya was a great enthusiast of bulls and bullfighting, to which subject he dedicated, amongst other works, his Bullfighting (Tauromaquia) series of etchings, made up of 33 plates and published in 1816.