Dragging Away the Bull (El arrastre) 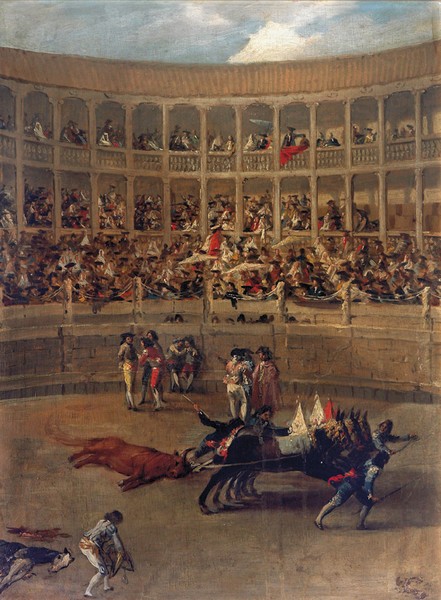 This work was painted during Goya's stay in Cádiz and was delivered in January 1794 to the Royal Academy of Fine Arts of San Fernando, Madrid, where, according to Xavier de Salas, it remained for some time. It later went to the collection of the Duke and Duchess of Medinaceli. At one point it was in the collection of the Marquis of La Torrecilla.

It was exhibited for the first time in the exhibition Francisco de Goya, IV Centenario de la Capitalidad, held in Madrid in 1961.

The scene, which may be set in the bullring of Madrid, shows a group of mules, led by four men, removing a dead bull from the ring by dragging it along the ground. Behind them, a group of toreros are conversing in front of the barrier. The crowd in the stands has been painted by Goya with delicate touches of the brush. Despite the tiny dimensions of the figures it is possible to make out the hats worn by the men, the white mantillas of the women, and a number of white parasols.

Goya has introduced some modifications to this painting when compared with the one that precedes it, Matador Killing the Bull, in this series dedicated to bullfighting. The colours are visibly darker and there are no longer any areas in the shade; the entire bullring is lit uniformly. In addition, this work has a slightly higher vantage point when compared with the other.