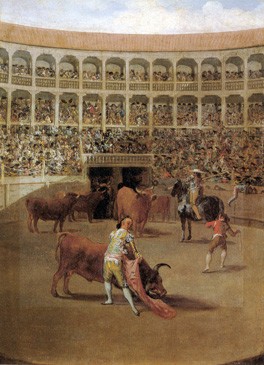 This work was painted during Goya's stay in Cádiz and was given to the Royal Academy of Fine Arts of San Fernando in January 1794.

In a bullring, perhaps that of Madrid, filled with spectators, we see in the foreground a torero who has his back to us and is holding his cape in both hands as the bull lunges past him. According to Gassier, this type of pass was invented in Goya's time by the famous torero José Delgado (1754-1801), better known as "Pepe-Hillo", who described it in his book entitled The Art of Bullfighting or Tauromachy (Arte de torear o La tauromaquia). Behind the bullfighter, a group of bulls are being herded towards the doors to the bullpen by a picador mounted on horseback.

Using deft brushstrokes, Goya has suggested the figures in the stands only very superficially, representing in much greater detail those in the foreground, and especially the torero himself. The dabs of white on his suit create tiny highlights which further contribute to increasing this figure's importance within the scene. The bullfight is taking place in the afternoon, and we can see how the shadow has begun to invade the left-hand side of the stands.