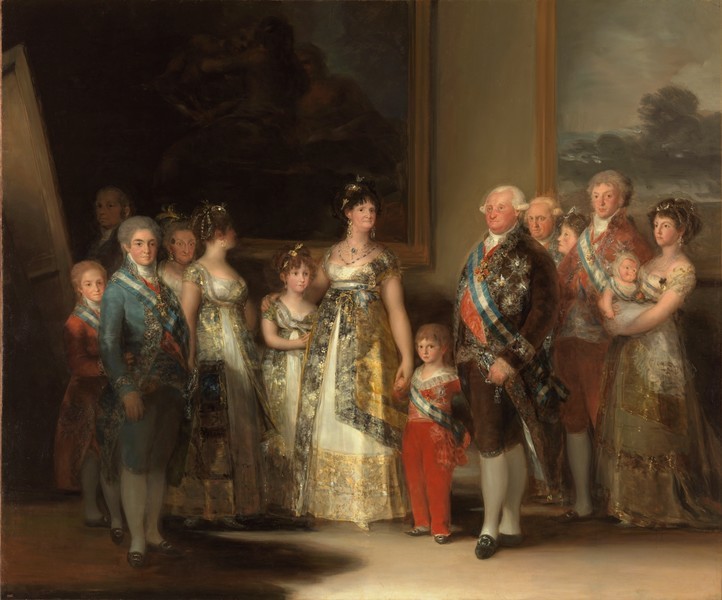 This work came from the Royal Collection. In 1814 it was in the Royal Palace in Madrid and in 1824 it formed part of the collections of the Prado Museum, appearing in the museum's catalogue for the first time in 1872.

The painting, clearly conceived as a dynastic portrait, was made between Aranjuez, where Goya would have made the preparatory drawings, and Madrid, in the spring and summer of 1800, shortly after Goya was named First Court Painter (1799).

This large group portrait, set in a room decorated with other paintings and lit from the left-hand side, is presided over by King Charles IV (1748-1819) and Queen María Luisa de Parma (1751-1818), in the centre of the composition. Beside them are their children, the Infanta María Isabel (1789-1848) and the Infante Francisco de Paula (1794-1865). The group to the left of them features, in the front, the Prince of Asturias and future King Ferdinand VII (1784-1833), dressed in blue; behind him the Infante Carlos María Isidro (1788-1855), second in succession to the throne; the Infanta María Josefa (1744-1801), the king's sister; an unidentified young woman; and, in the shadows at the back, Goya, painting at a large canvas. In the group on the right is the Infante Antonio Pascual (1755-1817), the king's brother. Behind him are the Infanta Carlota Joaquina (1775-1830), Queen of Portugal and eldest daughter of the king and queen; the Prince and Princess of Parma: the Infanta María Luisa (1782-1824), holding her son the Infante Carlos Luis; and her husband, Luis de Bourbon (1799-1883), the future King of Etruria.

The formal and compositional references to Las Meninas are clear, demonstrating the admiration that Goya felt for Velázquez.

Margarita Moreno tells us that the original canvas, formed by three pieces of cloth, has been relined. Scratches are visible on the surface, caused by the spreading of the reddish-coloured preparation. The craquelure in the paint has been reduced due to the relining. Those areas where paint had been lost have been retouched and these restored areas have changed over time. The varnish has yellowed, and there are stains and blanching due to surface dirt. Manuel Arpe restored the work in 1967