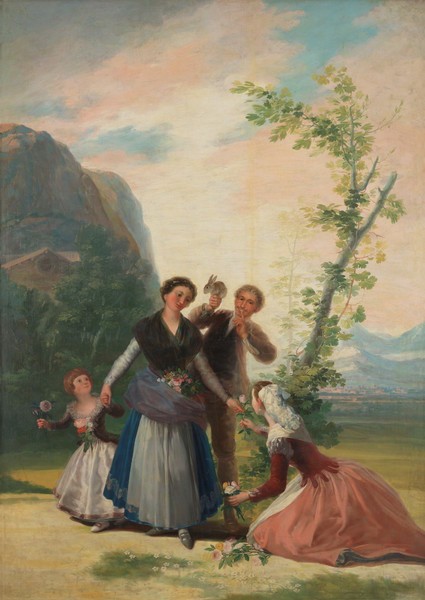 This piece forms part of the series of cartoons that Goya made for the decoration of the king's conversation room in the palace of El Pardo. They were painted between May 1786, shortly after Goya was named royal painter, and the end of 1787. Owing to the death of Charles III in 1788, this group of works never occupied its originally planned destination but was instead spread out between various rooms in the palace of San Lorenzo de El Escorial. With this series Goya once again took up the work on the tapestry cartoons, six years after the last delivery, which was made before the closing and reopening of the tapestry factory.

Since the artist was now receiving an annual salary, thanks to his new status as chamber painter, we do not have the detailed invoices with descriptions of the cartoons that we had for the previous series. We do however have the accounts for his material expenses. In the second half of November 1786, the account of the carpenter who made the stretchers for Goya's cartoons includes six pieces: those of the four seasons and those of The Injured Mason and Poor Children at the Well.

This cartoon was included in Vicente López's inventory of 1834, undertaken for Ferdinand VII's will. Around 1856 or 1857, the cartoon was moved from the Royal Tapestry Factory of Santa Bárbara to the Palacio de Oriente in Madrid, and remained in the tapestry basements until orders given on 18 January and 9 February 1870 had it taken to the Prado Museum.

The tapestry of The Flower Girls would have hung on the south wall of the room, flanking a door with its pair, The Grape Harvest (or Autumn).

We see two women carrying flowers; one of them is seated on the ground with her back to us, whilst the other takes a young girl by the hand. Behind them is a man holding up a hare, gesturing for silence with his finger over his mouth so as not to spoil the practical joke he is about to play on the woman who is standing. The figures form a clear pyramid-shaped composition. Their faces are carefully rendered, and Goya went to great pains to reflect the mood of the characters, hence the man's wide grin and the daydreaming gaze of the flower girl.

Its delicateness, the countryside theme that it represents, the diversity of colours and the elements taken from nature make The Flower Girls the most traditional and rococo of those works made for the palace of El Pardo.

This cartoon has also been known by the title of Spring, and forms part of the series of cartoons representing the four seasons. Right in the centre of the composition, where the two diagonal lines cross, we find a flower, the symbol of spring. Nordström also tells us that the rabbit is a symbol of fertility, and therefore of spring, too.

Tomlinson continues with this springtime interpretation by associating the flower with the goddess Venus and the girl with youth and the rebirth of spring.