How the ancient Spaniards hunted bulls on horseback in the countryside 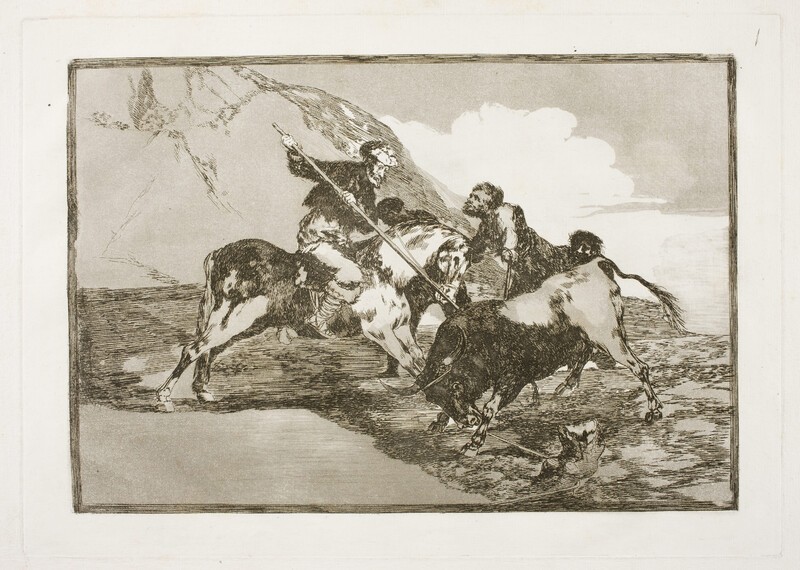 Goya began work on his fourth series of engravings in 1814-1815, at the same time as the Desastres de la Guerra (Disasters of War) was being completed. Although the motives for the choice of subject matter are not clear, and may perhaps be ambivalent, the traditional explanation points, on the one hand, to their precarious economic situation, and on the other to a need for distraction and refuge, or evocation of more pleasant past times. In both cases, the bullfighting theme, not at all controversial in view of the reintroduction of censorship and the Inquisition in Spain, was also ideal due to its potential sales success and the painter's proven fondness for the fiesta, although some authors, including Nigel Glendinning, point to a possible criticism of the violence turned into a spectacle ("the disasters of the party"), or a universal report of any type of violence generated by human beings (as is war), an enlightened vision in which friends of the artist participated, such as Gaspar Melchor de Jovellanos, author of a Memoir for the arrangement of the police of spectacles and amusements, and on their origin in Spain (1790), in which bullfights were condemned with economic and moral arguments, or José Vargas Ponce, who wrote a Dissertation on bullfights (not published until 1961). Finally, other specialists have allowed the Bullfighting as the result of a personal crisis of the artist, and more recently the political context has been pointed out in order to interpret the series and approach the true intentions of its author, which could well have been various and even contradictory, but in any case openend a new path towards modernity in the representation of this genre, capturing the essence of the party, with its positive and negative aspects, vindicating the role of the people and highlighting its symbolic force and universal dimension.

On the other hand, its necessary to remember that, after the War of Independence and with the return of Fernando VII, there had been a resurgence of bullfighting, which had been prohibited between 1805 and 1808.

It is very plausible that Juan Agustín Ceán Bermúdez -a well-known anti-bullfighting activist- participated in the overall conception of the series, and in fact Goya gave him a set of proofs, the so-called "Ceán Album" (London, British Museum), in which two engravings were included, one of them titled Way of flying -edited later with the Disparates, whose titles, proposed by Ceán himself, present small variations with those published in the preliminary printed sheet of the 1816 edition.  may have drawn inspiration for the choice of subjects and titles from well-known bullfighting publications at the time, such as  Historical Letter on the Origin and Progress of Bullfighting in Spain (Madrid, 1777; reed. in 1801) by Nicolás F. de Moratín or The Art of Bullfighting on Horseback and on Foot (Madrid, 1804) by the master Pepe Hillo (José Delgado).

The announcement of the sale of the edition, composed of 33 engravings under the title Collection of prints invented and engraved with etching by Mr. Francisco de Goya, painter of Chamber of S.M., in which diverse bullfighting suertes are represented, and lances occurred on the occasion of those functions in our bullrings..., appeared on October 28, 1816 in the Diario de Madrid and on December 31 of that year in the Gaceta de Madrid.

In the Public Library of Boston (USA) there is a copy with the titles in italics handwritten in pencil by Goya on the prints.

The first plate of the first print in the series is preserved in the National Chalcography (part of the Royal Academy of Fine Arts of San Fernando), with Un caballero en plaza quebrando un rejoncillo con ayuda de un chulo (Tauromaquia A), engraved on the reverse.