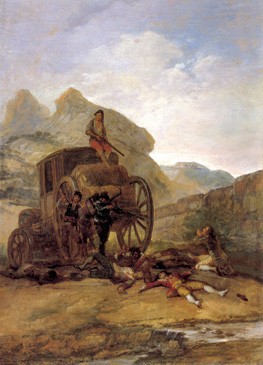 This work came from the collections of the Count of Adanero and the Marquis of Castro Serna.

This work forms part of the group of small-scale paintings that Goya painted during his stay in Cádiz between 1792 and 1793. These paintings afforded him the opportunity to give free rein to his creativity.

In the middle of a rocky landscape, a group of four bandits have just attacked a stagecoach. Two of them are looking around to see if anyone is coming, one of them perched atop the coach. Another bandit is stabbing one of the travellers as he lies on the ground. A fourth outlaw holds a rifle, with which he is about to shoot another traveller, who is in this case kneeling down, begging for mercy. Three bodies strewn across the ground complete the scene.

This same subject had already been dealt with by Goya in a painting made for the Duchess of Osuna (Stagecoach Hijacking), which the artist described as follows: "It shows some thieves who have attacked a stagecoach and after having overpowered and killed some of the travellers and an officer, who fought back, they are about to tie up a man and a woman". In the 1793 painting, Goya recycles several elements from the earlier work, such as the man keeping watch from atop the stagecoach and the traveller pleading with the outlaws, but in the later painting he has made the bandits even crueller.

This work shows Goya's interest in something which was all too common an occurrence in Spain at the time, especially in the mountains of Andalucía: banditry. He emphasizes the ferocity of these characters, who in popular imagination had taken on a positive, almost legendary aura, quite unlike their real character and the violence of their actions. Public interest in this theme gave rise to another work, similar to that of Goya: the print by Marcos Téllez entitled Highwaymen (Salteadores de caminos), made at the end of the 1790s (National Library, Madrid).