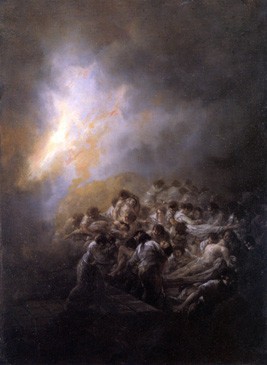 Before arriving at its current location, this painting has belonged to a number of different owners, including: Ángela Sulpice y Chopinot, Madrid; the Count of Adanero, Madrid; the Marquis of Castro Serna, Madrid; the Duke of Campo Giro; and José Luis Várez, San Sebastián.

This scene, painted whilst Goya was staying at the home of his friend Sebastián Martínez in Cádiz, is set in an indeterminate space in which a crowd of people is fleeing from a fire, which can just be made out in the background. It takes place at night and the people are dressed in white nightclothes, caught unawares by the fire as they slept. Many of them have already perished, whilst others run away in fear or are carried along by other survivors.

The predominantly dark painting features two lighter-coloured areas. One of these, intensely bright and flecked by yellow brushstrokes, is the light given off by the fire, whilst the other, somewhat more tenuous and dynamic, is formed by the mass of human beings dressed in white, escaping from the flames. Just as he did in The Shipwreck, in the foreground Goya has placed a half-naked body, its torso slightly arched, extended out across the ground so as to grab our attention. This figure could have been inspired by the posture adopted by Abel as he is being brutally murdered in the drawing that the artist made on page 31a of his Italian Sketchbook.

In this painting, Goya has done away with any spatial reference that might help the viewer to orientate themselves. This vagueness heightens the sensation of helplessness and produces an atmosphere of terror and distress. As such, it seems unlikely that Goya was referring to any specific event and it is reasonable to assume that this image, verging on the abstract, is an allusion to tragedies and disasters in general.

This work is directly related to the scene of a fire which Goya painted on and which is now in the National Fine Arts Museum in Buenos Aires. That later work is even more abstract and essential in its references.

See Bulls in the Meadow.